Chasing a Duckworth-Lewis revised target of 219 in 31 overs, Zimbabwe rode on Ervine's 55-ball unbeaten knock to win with 10 balls to spare. 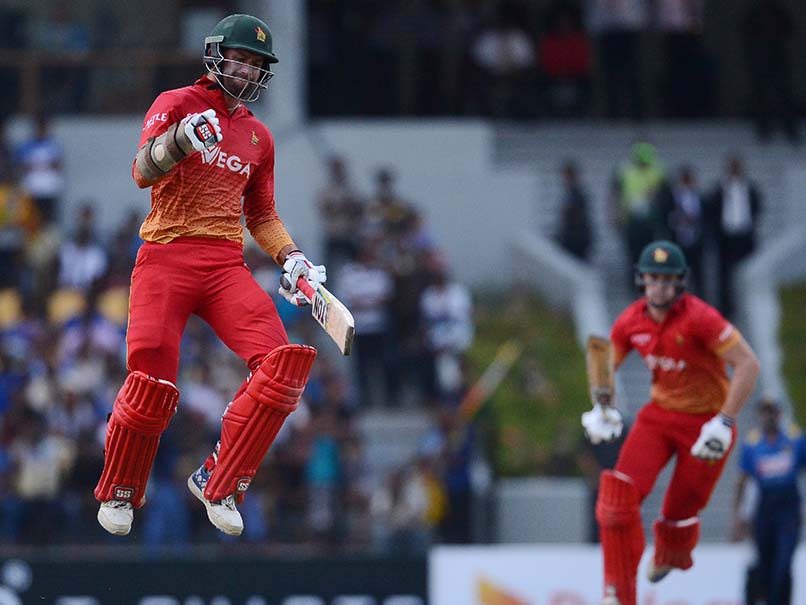 Batsman Craig Ervine hit a quickfire 69 to help Zimbabwe pull off a four-wicket victory over Sri Lanka in the rain-shortened fourth one-day international and level the five-match series at 2-2 in Hambantota on Saturday. Chasing a Duckworth-Lewis revised target of 219 in 31 overs, Zimbabwe rode on Ervine's 55-ball unbeaten knock to win with 10 balls to spare at the Mahinda Rajapaksa International Stadium. Earlier, openers Niroshan Dickwella (116) and Danushka Gunathilaka (87) put together 209 runs in Sri Lanka's 300-6 -- becoming the first pair in ODI history to score back-to-back double century partnerships.

The left-handed batting duo had put on a 229-run match-winning stand in the previous ODI on Thursday at the same venue but their efforts went in vain the second time around.

Solomon Mire (43) and Hamilton Masakadza (28) set up the Zimbabwe chase before teenage leg-spinner Wanindu Hasaranga, who took three wickets, got the openers trudging back to the pavilion.

But Ervine and Malcolm Waller (20) made sure the chase remained on track with their 43-run sixth-wicket partnership after rain interrupted play for over one-and-a-half-hours.

"We knew we were ahead (of the rate) and we were always in the game and the way we batted was excellent," Zimbabwe skipper Graeme Cremer said in the post-match presentation.

"We have seen we can chase down a score and set a score and our batting has come right," Cremer said on the prospect of his side eyeing a major series win in over eight years.

Ervine, a left-handed batsman and a right-arm spinner, smashed eight fours and a six to get the man of the match award.

- 'Turning point' -
For the hosts, Dickwella hit his second successive century with a commanding knock, while Gunathilaka was bowled 13 short of what could have been his second ODI ton.

Wicketkeeper-batsman Dickwella, who scored 102 in the third ODI, played a patient 118-ball knock laced with eight boundaries before being trapped lbw.

Zimbabwe off-spinner Waller got the two prized wickets in successive overs to pull things back for the visitors.

Paceman Chris Mpofu also got two wickets to rattle the Sri Lankan middle-order as the hosts slipped from 216-1 to 263-5.

"The turning point was when we pulled it back in the last ten overs. Sri Lanka looked like getting 340-350, so the way the bowlers pulled it back was excellent," said Cremer.

Meanwhile Cremer was docked 20 per cent of his match fee for his team's slow over rate while the rest of the side was slapped with a 10 percent penalty.

Zimbabwe were found to be one over short of their target after time allowances were taken into consideration by the International Cricket Council (ICC) match referee Chris Broad.

Sri Lanka captain Angelo Mathews, who lifted his side's total with his 40-ball 42, said that even though he felt "300 was enough", the batsmen's shot selection was not up to the mark.

The fifth and deciding ODI is scheduled on Monday at the same venue. The two sides will also play a one-off Test starting July 14.

Comments
Topics mentioned in this article
Zimbabwe Cricket Team Sri Lanka Cricket Team Craig Ervine Niroshan Dickwella Hamilton Masakadza Cricket
Get the latest updates on Fifa Worldcup 2022 and check out  Fifa World Cup Schedule, Stats and Live Cricket Score. Like us on Facebook or follow us on Twitter for more sports updates. You can also download the NDTV Cricket app for Android or iOS.