Thrashed in the first two matches of the series to surrender the Wisden Trophy after ten years in English possession, the tourists gained a consolation 232-run victory. 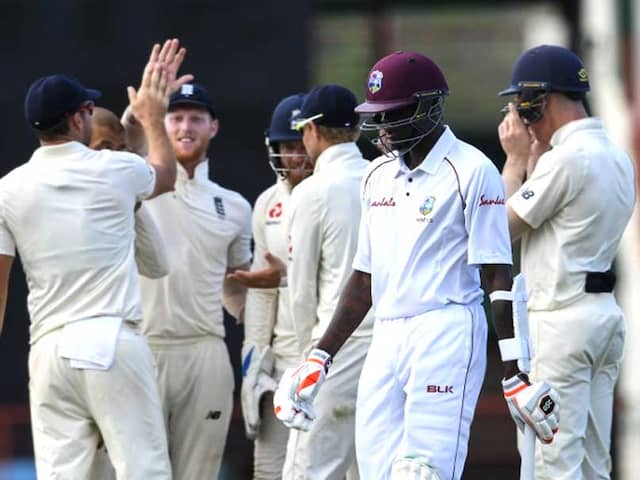 The Windies were dismissed for 252 deep into the final session.© AFP

England ended a disappointing Test series with the consolation of a comprehensive victory over the Windies on the fourth day of the third and final Test in St Lucia on Tuesday. Thrashed in the first two matches of the series to surrender the Wisden Trophy after ten years in English possession, the tourists gained a measure of consolation in completing a 232-run victory with a day to spare. Set an improbable target of 485 after Joe Root declared his side's second innings at 361 for five following his dismissal for 122, the home team were eventually dismissed for 252 deep into the final session when Ben Stokes had Keemo Paul caught and bowled.

Paul, hobbled by a leg injury which prevented him from bowling throughout most of the England second innings, only came out to bat as last man to allow Roston Chase to complete a deserved fifth Test century.

Chase was on 97 when Shannon Gabriel was ninth out, but the young all-rounder hung around long enough for the tall right-hander to reach three figures, cutting Joe Denly to the backward-point boundary to achieve the landmark.

He finished unbeaten on 102 off 191 balls with 12 fours and one six embellishing his innings.

James Anderson, who blew away the Windies top order with three wickets before lunch, had no more success with the ball but his devastating early impact ensured that it was only a matter of when, not if England would have completed a massive victory on the fourth day.

Moeen Ali also claimed three wickets while Mark Wood, the tearaway fast bowler who took five wickets in the first innings, snared the important scalp of Shai Hope as the Windies slumped to 35 for four before lunch.

His six wickets and impact on the game earned him the 'man of the match' award.

"I watched Gabriel all season knocking us down and thought I had to get some back for us," he said of his raw pace. "I'm not thinking as far ahead as the Ashes. We've got a great squad and there's plenty more cricket to go."

Windies' only period of relative comfort at the crease came in the afternoon session when Chase and Shimron Hetmyer put on 45 runs for the fifth wicket.

They undid all their good work however when, on the stroke of the mid-session drinks break, Hetmyer was run out for 19 coming back for a third run as Denly's throw from the cover boundary to wicketkeeper Jonny Bairstow found the left-hander short of his ground.

Anderson triggered the West Indies slide with just the third delivery of the innings when John Campbell, facing his first ball, sliced a booming drive to Ali at gully.

Campbell's opening partner, Kraigg Brathwaite, offered little resistance himself when he prodded indecisively at a full-length delivery and Stokes held the catch at second slip.

Worse was the follow for the West Indies when Bravo, troubled by a finger injury which kept him off the field for the entire England second innings, followed a delivery from Anderson for Root to complete a comfortable catch at first slip.

England clearly had a swift declaration on their minds at the start of the day's play with Root and Stokes resuming at 325 for four.

They belted 36 runs at a run-a-minute until the skipper miscued a low full-toss from Gabriel and Hetmyer held the catch diving forward at midwicket to prompt the declaration.

Kemar Roach finished with one wicket in the innings, lifting his tally to a series-leading 18.

His exploits earlier in the series, especially the five-wicket haul on the second day of the first Test in Barbados when England were routed for 77, earned him the 'man of the series' accolade.

"All the hard work has paid off," he said in reflecting on his performances over the three Tests. "I am very proud of this team and I want us to work even harder and get better following this series win."