England were 171 for four at stumps, having won the toss, with 31 of the scheduled 90 overs lost to bad weather on the opening day of the 100th Test at The Oval. 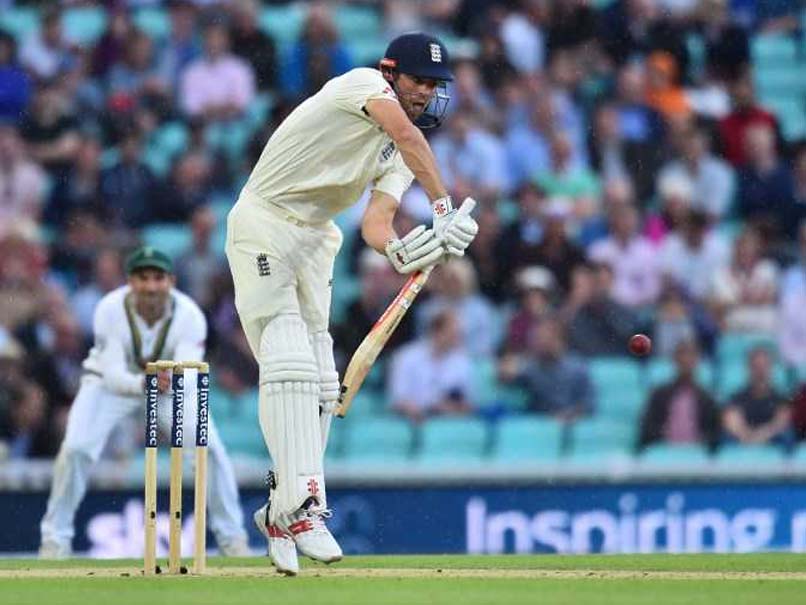 Vernon Philander again proved a thorn in England's side as Alastair Cook held firm against South Africa in the third Test at The Oval on Thursday. England were 171 for four at stumps, having won the toss, with 31 of the scheduled 90 overs lost to bad weather on the opening day of the 100th Test at The Oval. Pace bowling all-rounder Philander had superb figures of two wickets for 17 runs in 12 overs, including five maidens, despite a stomach bug.

That followed his man-of-the-match display with both bat and ball in South Africa's crushing 340-run victory in the second Test at Trent Bridge last week -- a result that left the four-match series level at 1-1. But former England captain Cook was 82 not out at Thursday's close. Already England's leading Test run-scorer, the left-handed opener spent more than four-and-a-half hours at the crease to be in sight of his 31st century at this level. Ben Stokes was unbeaten on 21.

England had been heavily criticised by several former captains for an inability to bat time and wear down the Proteas at Trent Bridge, where they were twice bowled out cheaply and folded for just 133 in their second innings.

Although the overcast conditions and green-tinged pitch promised to assist pace bowlers, England captain Joe Root opted to bat first after winning the toss, just as South Africa captain Faf du Plessis had done in a similar situation in Nottingham.

Root clearly hoped England could come through some early adverse circumstances and may also have wanted to show confidence in his under-fire batsmen.

But it was not long before England lost their first wicket.

Keaton Jennings, battling to retain his place, was repeatedly beaten outside off stump by Philander and it was no surprise when the South Africa-born opener eventually edged the seamer low to Dean Elgar at third slip for a nine-ball nought.

Tom Westley, one of three England debutants, joined Essex team-mate and mentor Cook with the hosts 12 for one.

The 28-year-old right-hander, selected after a finger injury ruled out the struggling Gary Ballance, got off the mark with a composed leg side four off fast bowler Morne Morkel.

Westley, who earlier this season scored a hundred against South Africa for the second-string England Lions, then cover-drove and on-drove left-arm spinner Keshav Maharaj for two well-struck boundaries in an over.

Cook had made 28 when South Africa quick Chris Morris appealed for lbw, but a review of umpire Joel Wilson's not out decision showed the batsman had got an edge.

Westley, however, had added just one to his interval score when, four balls after the break, he nicked a Morris delivery that curved away to du Plessis at second slip.

It was the end of a promising innings of 25 and a second-wicket stand of 52 with Cook.

Star batsman Root then made 29 before he edged an excellent Philander ball that moved away off the seam and was brilliantly caught one-handed by wicket-keeper Quinton de Kock, diving across first slip.

Kagiso Rabada, returning after being banned from the second Test for swearing at Stokes in the series opener at Lord's, then got in on the act.

The fast bowler produced a superb inswinging yorker that knocked Dawid Malan, another of England's debutants, off his feet before crashing into middle stump.

Middlesex left-hander Malan, born in London but brought up in South Africa, was out for one and England were 120 for four, with the Proteas hoping Rabada's joyful celebrations did not contain any obscene words on this occasion.

Comments
Topics mentioned in this article
England Cricket Team South Africa Cricket Team Alastair Cook Joe Root Vernon Philander Faf du Plessis The Oval, London Cricket
Get the latest updates on IPL 2020, check out the IPL Schedule for 2020 and Indian Premier League (IPL) Cricket live score . Like us on Facebook or follow us on Twitter for more sports updates. You can also download the NDTV Cricket app for Android or iOS.