Clinical South Africa left no rescue route open for New Zealand as the hosts here were defeated by 5 wickets in the final ODI for a 3-0 ODI annihilation, on Saturday. 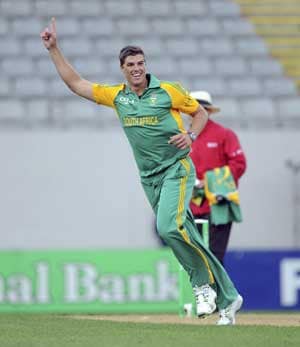 Clinical South Africa left no rescue route open for New Zealand as the hosts here were defeated by 5 wickets in the final ODI for a 3-0 ODI annihilation, on Saturday.

South Africa rested their bowler of the series and three injured batsmen, promoted a tailender to the top of the order, and had their big-hitting allrounder at No.3, but New Zealand still could not prevent a heavy five-wicket loss and a whitewash in a series that rarely had the visitors extended. Marchant de Lange had broken loose over a brittle New Zealand middle order to set up the emphatic victory - his 4 for 46 helping to dismiss the hosts for a paltry 206 after Dale Steyn and Lonwabo Tsotsobe had built an impressive dam of pressure with the new ball. Hashim Amla made another pleasing half-century to lead South Africa's reply, which achieved the target in the 44th over.

New Zealand's innings clunked and whirred in frustrating spurts until the hosts were put out of their misery in 47th over. Though they did well at times to negotiate terrific one-day bowling, particularly from South Africa's fast men, wickets fell with startling regularity and batsmen succumbed just as New Zealand seemed to be recovering from the last blow. The first five partnerships read 13, 32, 29, 31, 55. Each pair had a start, but none could complete the recovery they had begun, as batsmen lost their heads and their wickets to surrender any momentum they had wrested - usually at a significant cost to the scoring-rate.

South Africa were almost casual in reply. Wayne Parnell, who has an ODI average below 20 and a List A average below 25, opened the innings with Hashim Amla, after Jacques Kallis and Justin Ontong joined Graeme Smith on the injury list. The pair made a swift 80-run dent in the target, before Parnell was dismissed in the 16th over. Even with South Africa's significantly depleted batting order, with Amla contributing once more, 207 turned out to be a cakewalk.

Amla's innings didn't match the pace of his Napier knock at Eden Park, but it was no less classy. Favouring the leg side for boundary hits this time, he negotiated the new ball with characteristic ease. A knee-high full toss from Kyle Mills was succinctly dispatched, before a serene glide down the ground brought four more in the next over. The ease with which Parnell also managed the early period perhaps betrayed the gulf between South Africa' new-ball pair - who at times were unplayable - and New Zealand's opening bowlers, but it was also a statement on an Eden Park pitch that suited batting.

Amla survived a reprieve on 30, when he was dropped by Nathan McCullum, but when he was eventually dismissed for 76, the middle order only needed to saunter home. Albie Morkel hit three sixes in a brisk 41, and though both Faf du Plessis and JP Duminy were dismissed late in the game by Rob Nicol, with less than 20 runs to get, AB de Villiers had little to do.

de Villiers had hoped to exploit the weather and a pitch that had had some rain when he opted to bowl, and his new-ball bowlers could have hardly made better use of the friendly conditions. The skid in the surface added another layer of venom to Steyn's outswing, while Tsotsobe's steady seamers also benefitted from movement not normally seen at Eden Park. The pair's unerring lines and impeccable length offered precious little to New Zealand's typically explosive top order, but even when they did stray, as Tsotsobe did in the fifth over, South Africa's fielders shone - Faf du Plessis dived well to his left to snatch a full blooded aerial cut from Martin Guptill.

While Steyn and Tsotsobe thrived on the movement created by their skill, de Lange's raw pace and aggressive length added the brutal edge to the attack. Rob Nicol was laid flat on his back by a 144kph bouncer at his throat, while McCullum, too, was hopping around deep in the crease to stay on top of the bounce.

Nicol succumbed to a slider from Johan Botha after he had done well to survive the pace barrage, but de Lange returned to fell McCullum in the 22nd over, in a dismissal that betrayed McCullum's scars from their previous battle. Having made 13 from Dale Steyn's previous over, McCullum seemed to be reviving a scoring-rate after having accumulated steadily alongside Kane Williamson. But he played back to de Lange, in anticipation of the quick, short ball, and ended up only scooping the full delivery to point.

Williamson and James Franklin then began yet another phase of rebuilding, but almost as soon as their association began to gain traction, Williamson was run out superbly by du Plessis, who was horizontal in mid-flight when he let his pinpoint throw fly. In a cruel snapshot of New Zealand's innings, the wicket had fallen the very delivery after the first four of the partnership was struck. ?

Colin de Grandhomme lofted a free-hit ball over deep midwicket to relax early nerves on debut, and the risk-averse accumulation resumed anew, this time with perhaps a tad more vigour. Franklin was intent on dropping anchor, but de Grandhomme showed glimmers of his aggressive potential when he threw in the odd calculated slog amid the singles. But although a 40-minute rain delay just before the batting Powerplay didn't assuage de Grandhomme's desire to boost the scoring-rate, a hostile maiden from Steyn quieted his progress, and then a direct hit from Albie Morkel at mid-off silenced him altogether. Another start, another poor option and another dismissal just as a platform was being put together - New Zealand's innings read like a study in badly learnt lessons. de Grandhomme's departure left New Zealand 160 for 5 in the 39th over.

The wickets of Franklin - again to an awful shot - and Andrew Ellis, three overs later, plunged them further, and only a tailender's 13 from Michael Bates helped them limp beyond 200.

Comments
Topics mentioned in this article
Cricket New Zealand Cricket Team Hashim Amla AB de Villiers Marchant de Lange Pakistan Cricket Team South Africa Cricket Team
Get the latest updates on India vs Australia Series, check out the India vs Australia Schedule for 2020-21 and Ind vs Aus live score . Like us on Facebook or follow us on Twitter for more sports updates. You can also download the NDTV Cricket app for Android or iOS.