England were demolished for 132 with Kemar Roach and Jason Holder claiming four wickets each. 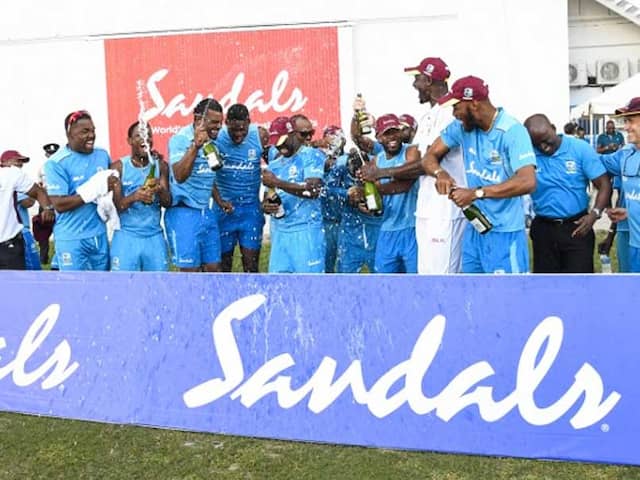 The Windies won the series 2-0 with the final match of the rubber starting next Saturday.© AFP

Kemar Roach and captain Jason Holder led another rout of the England batting line-up as the Windies completed a crushing series-clinching 10-wicket victory after tea on the third day of the second Test at the Sir Vivian Richards Stadium in Antigua on Saturday. Trailing by 119 runs at the start of the second innings after Darren Bravo's ultra-patient half-century extended the Windies first innings total to 306 in the morning, England were demolished for 132 with Roach and Holder claiming four wickets each.

Openers Kraigg Brathwaite and John Campbell then enjoyed the formality of knocking off the 14 runs required for victory in 2.1 overs, Campbell sealing the result in style by hoisting James Anderson for six over midwicket.

Following on a 381-run hammering of the visitors in the first Test in Barbados a week earlier, the result gave the West Indies the series 2-0 with the final match of the rubber starting next Saturday in St Lucia.

The Windies have also reclaimed the Wisden Trophy, symbol of supremacy in Test series between the two teams, after almost 10 years in England hands.

These two comprehensive victories also mark the first occasion since the 1994 tour of the Caribbean that the West Indies have beaten England in successive Tests.

"This group has been together for a while and we have been doing some exceptional things. The way we ended last year was disappointing and everyone wanted to turn things around."

A dejected England captain Joe Root said: "It's been frustrating. I think we've been outperformed once again and that's quite hard to take.

"As a bowling group I thought we worked exceptionally hard. Scoring under 200 isn't going to win you many games of cricket."

While Roach (four for 52, match analysis of eight for 82) and Holder (four for 43) claimed the main bowling honours, fellow pacer Alzarri Joseph's contribution was especially significant given that he decided to continue playing the match despite the passing of his ailing mother, Sharon, early in the morning.

He claimed the wickets of Root and debutant opener Joe Denly just before the end of the afternoon session after Holder made the first two breakthroughs in removing Rory Burns and Jonny Bairstow after an opening partnership of 35.

Roach, who earned the Man of the Match award, then took over in tandem with Holder after tea, triggering England's final slide to humiliation by bowling Ben Stokes off the inside-edge as six wickets tumbled for 44 runs, Joseph taking a diving, sprawling catch at mid-on off his captain to dismiss Anderson and end another abject batting display by a team ranked number three in Tests.

"I started a bit slowly today but changed ends and that brought the luck," said Roach of his contribution with the ball in the second innings. "A series win at home against England, the third best team in the world, is fantastic."

Most of the focus at the start of the day was on Bravo, the lone West Indies batsman to fail in both innings of the first Test.

He made amends in a manner completely against his nature, his even 50 coming off 216 deliveries, the slowest-ever by a West Indies batsman in Test cricket in terms of balls faced.

In stark contrast to the watchful defiance which typified his near six-hour occupation of the crease, the left-hander was last out when he charged down the pitch at Moeen Ali to be stumped.

It was the off-spinner's third wicket of the innings.

Stuart Broad, England's outstanding bowler on the second day when he picked up three wickets, was left empty-handed as opening partner Anderson finally got among the wickets to limit the West Indies quest for a sizeable first innings advantage after they resumed at 272 for six.

He first removed Holder, who contributed 22 to a 45-run seventh-wicket partnership with Bravo, before Roach became Anderson's second wicket courtesy of a fine diving catch by Stokes at second slip.

Joseph's arrival at the crease was greeted with sympathetic applause from the crowd and, sportingly, the England players on the field. Both teams wore black armbands as a mark of respect at his loss.

There was no sympathy though for the young man in his time at the wicket as Stokes served up a lifting delivery which Joseph could only fend into the slip cordon for Burns to take the catch.

Joined by last man Shannon Gabriel, Bravo hoisted Ali for six to close in on the half-century. But it was the bowler who had the last laugh after the batsman accomplished the landmark.