Having dismissed England for 187 in their first innings on day one, the Windies, starting the morning at 30 without loss, reached stumps at 272 for six. 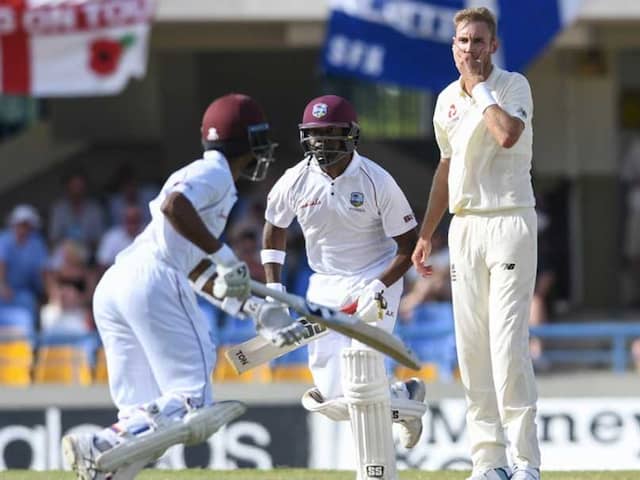 Windies fought through a tough second day of the second Test against England and rode their luck to edge ahead of their opponents at the Sir Vivian Richards Stadium in Antigua on Friday. Having dismissed the tourists for 187 in their first innings on day one, the hosts, starting the morning at 30 without loss, reached stumps at 272 for six, a lead of 85 runs with four wickets in hand with two established batsmen - Darren Bravo and captain Jason Holder - at the crease.

Bravo's display of patience and discipline in getting to 33 not out after four hours at the crease typified the Windies effort against a purposeful England bowling attack led by the aggressive but desperately unlucky Stuart Broad.

Broad, surprisingly dropped for the first Test in Barbados which the Caribbean side won by a record home margin of 381 runs, left his teammates wondering what could have been a week earlier as he led the England effort with figures of three for 42 off 28 overs.

Seaming the ball away sharply and getting exaggerated bounce from a green, uneven surface, the pacer should have enjoyed more success as two clear catches were put down off his bowling while he repeatedly beat the batsmen's edges without getting the reward he deserved for his perseverance.

Moeen Ali, topscorer with 60 on day one, underlined his all-round value to the England cause with two wickets in the afternoon session when the tourists enjoyed a period of dominance and threatened to dismiss the West Indies before the end of the day.

Ali accounted for Kraigg Brathwaite caught at short-leg for the innings topscore so far of 49 by substitute fielder Keaton Jennings to break a 63-run second-wicket partnership with Shai Hope.

He then added the important wicket of Shimron Hetmyer, the flamboyant left-hander attempting to repeat a heave for six earlier in the over but miscuing for James Anderson to take an excellent catch running in from the long-off boundary.

Exasperated by his lack of success in the morning, Broad was finally rewarded with the dismissals of Hope and Roston Chase in the same over when play resumed after lunch. Hope looked threatening on 44 when he was caught behind while Chase was left helpless by a delivery which barely got off the ground before clattering into his stumps.

Bravo, the only West Indies batsman to fail in both innings of the first Test, held firm with wickets falling around him until Shane Dowrich joined him in putting on exactly 50 for the sixth wicket.

Dowrich became Broad's third wicket for a battling 31, the only success England enjoyed with the second new ball in the final session of play.

"I think we deserved more than six wickets but we kept going, and that's good for the team," said Broad of the England effort on a frustrating day for them. "We're still in the game. There's a lot of fight left in that changing room."

At the start of the day Brathwaite and John Campbell extended their opening stand to 70 with Campbell getting to 47 before his luck ran out.

Reprieved within minutes of the start of play by a television review of an umpiring decision which was shown to be erroneous, the left-hander was then dropped by Jos Buttler at slip before top-edging an attempted pull just out of the reach of scampering substitute wicketkeeper Jonny Bairstow at backward square-leg.

Bairstow is continuing to do duty behind the stumps as the appointed gloveman, Ben Foakes, receives treatment for a blow on the hand from fast bowler Shannon Gabriel while compiling a hard-fought 35 runs on day one.

Campbell's moments of good fortune were all at Broad's expense.

It took the introduction of Ben Stokes into the attack for the opening pair to be separated as Campbell pushed at another delivery angled across him and Buttler atoned for his previous error with a catch every bit as straightforward as the one missed earlier off the suffering and increasingly aggravated Broad.