David Warner hit his second hundred in a row before Bangladesh fought back with quick strikes on a rain-hit third day of the second Test against Australia on Wednesday. 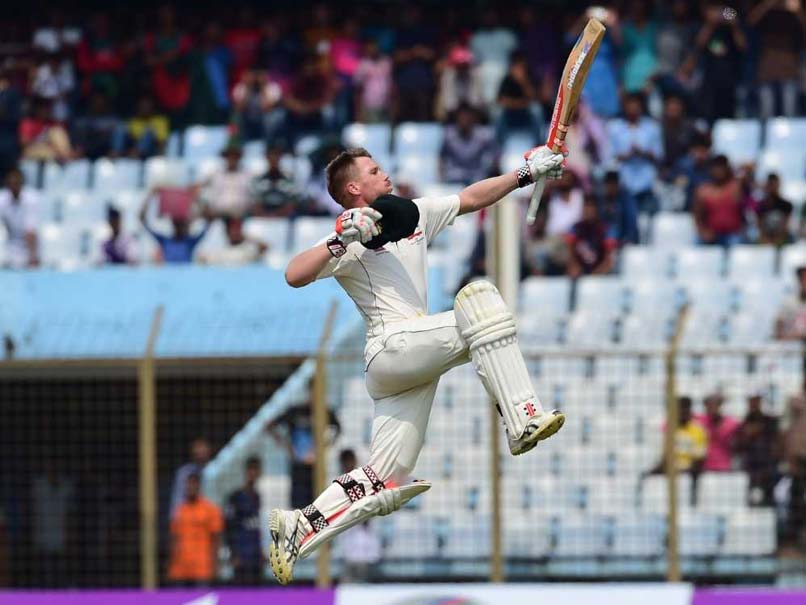 This was David Warner's 20th Test century and second in successive innings.© AFP

David Warner hit his second hundred in a row before Bangladeshfought back with quick strikes on a rain-hit third day of the second Test against Australia on Wednesday. The visitors were 377-9 when bad light stopped play with 13 overs remaining after rain washed out the entire first session at the Zahur Ahmed Chowdhury stadium in Chittagong. Australia now lead by 72 runs with Steve O'Keefe on eight and Nathan Lyon, who was yet to open his account, at the crease. Bangladesh, who elected to bat first, made 305. Mustafizur Rahman and Mehedi Hasan took three wickets each to bring Bangladesh back into the contest after Warner and Peter Handscomb put on 152 runs for the third wicket.

Warner showed remarkable patience during his uncharacteristically sedate 123 that came off 234 balls.

This was Warner's 20th Test century and second in successive innings, having made 112 in the first match which Australia lost by 20 runs in Dhaka.

He was dismissed by left-arm paceman Mustafizur, who was celebrating his 22nd birthday.

The century saw Warner join a select group of 12 Australian cricketers who have scored 20 or more Test tons, with his skipper Steve Smith the most recent to achieve the feat.

Warner, who resumed the day on 88, received good support from Handscomb, who made 82 off 144 balls before being run out by a sharp throw from Shakib Al Hasan at midwicket.

Handscomb responded to a call for a single that would have completed Warner's century but was sent back from halfway down the pitch.

Bangladesh were then frustrated as Mehedi dropped Glenn Maxwell on 10 at gully off Mustafizur.

Mehedi put down Hilton Cartwright off his own bowling on six, before making amends by having the same batsman caught at slip by Soumya Sarkar for 18 on the stroke of tea.

Mehedi removed Maxwell (38) and Pat Cummins (four) after the break and Shakib bowled Ashton Agar for his only wicket in the day.

Comments
Topics mentioned in this article
Australia Cricket Team Bangladesh Cricket Team David Warner Mehedi Hasan Steve O'Keefe Peter Handscomb Glenn Maxwell Cricket
Get the latest updates on IPL Auction 2023 and check out  IPL 2023 and Live Cricket Score. Like us on Facebook or follow us on Twitter for more sports updates. You can also download the NDTV Cricket app for Android or iOS.