David Warner and Peter Handscomb put together 127 runs to thwart the Bangladesh bowling attack, which failed to take a wicket in the final session of play. 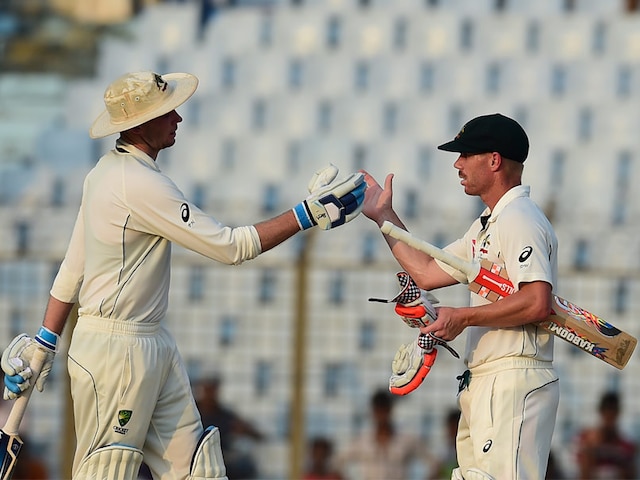 An unbeaten century stand between David Warner and Peter Handscomb led Australia's strong reply against Bangladesh on day two of the second and final Test in Chittagong on Tuesday. The visitors were 225-2 at stumps in their first innings, trailing by 80 runs after Bangladesh were bowled out for 305. Warner was batting on 88 with Handscomb on 69 at the Zahur Ahmed Chowdhury Stadium. Skipper Steve Smith hit a gritty 58 off 94 balls before being bowled by left-arm spinner Taijul Islam as the visitors slipped to 98-2.

The left-handed Warner and Handscomb then put together 127 runs to thwart the Bangladesh bowling attack, which failed to take a wicket in the final session of play.

Handscomb, who recorded his fourth Test fifty in just his 10th game, took regular drinks breaks as he battled exhaustion and dehydration in the final half-hour.

The swashbuckling Warner played a sedate innings, having hit just four boundaries during his 170-ball stay at the crease so far.

Warner rode his luck with two reprieves. He was dropped at short-leg on 52 and then Mushfiqur Rahim missed a stumping when he was on 73, with Taijul and Mehedi Hasan being the unlucky bowlers.

The left-hander tried to tickle a sliding delivery down the leg side but wicketkeeper Rahim took a stunning catch.

Warner was then involved in a 93-run second-wicket partnership with Smith as the pair steadied the innings.

Smith, who registered his 21st Test half-century, was done in by an arm ball from Taijul that sneaked through the bat-pad gap to hit the middle stump.

Earlier, Australian off-spinner Nathan Lyon claimed seven wickets to help bowl out the hosts for 305 in the first session.

Lyon returned impressive figures of 7-94 including Rahim's prized scalp for 68.

The home team has tightened security after the visitors' team bus was hit with a stone following the end of play on day one.

Comments
Topics mentioned in this article
Australia Cricket Team Bangladesh Cricket Team David Warner Peter Handscomb Cricket
Get the latest Cricket news, check out the India cricket schedule, Cricket live score . Like us on Facebook or follow us on Twitter for more sports updates. You can also download the NDTV Cricket app for Android or iOS.