All-rounder Shakib Al Hasan took five wickets for 85 runs to help the hosts bowl out Australia for 244 shortly into the second session on the fourth day. 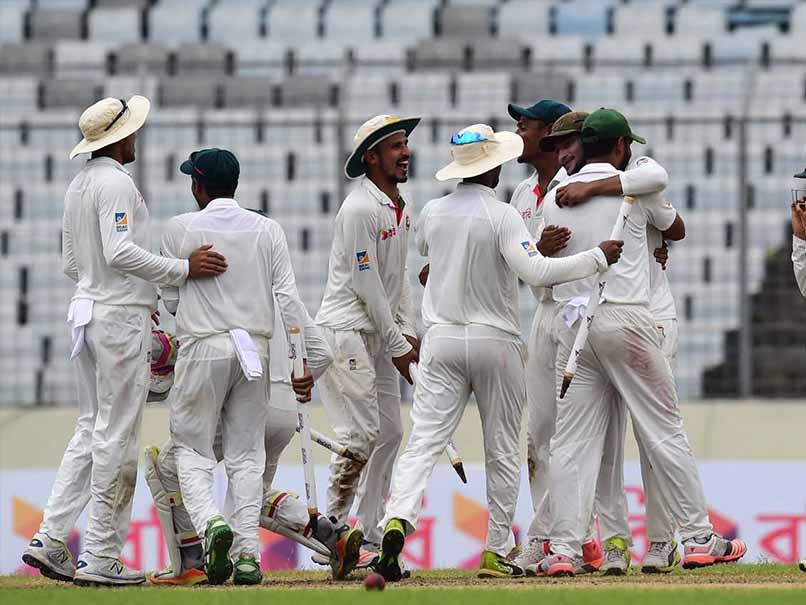 Bangladesh registered their first ever win over Australia in Test cricket, beating Steve Smith's men by 20 runs in a thrilling opening game in Dhaka on Wednesday. All-rounder Shakib Al Hasan took five wickets for 85 runs to help the hosts bowl out Australia for 244 shortly into the second session on the fourth day. David Warner top scored with 112 for the tourists, who were chasing a target of 265 after bowling out Bangladesh for 221 in the second innings.

Shakib lived up to his billing as the world's number one Test all-rounder, finishing with a match haul of 10 wickets with his left-arm spin and making 84 in Bangladesh's first-innings total of 260.

Australia -- who are touring Bangladesh for the first time in more than a decade -- are currently ranked fourth to Bangladesh's lowly ninth in ICC Test rankings.

They appeared to be coasting towards their fifth consecutive Test win over the minnows when Warner and Smith resumed the day on 109 for two.

Warner, who was unbeaten on 75 overnight, reached his 19th Test century off 121 balls with two runs off spinner Taijul Islam.

But Shakib brought Bangladesh back into the game, dismissing both Warner and Smith (37) to put pressure on the tourists.

Pat Cummins hit a valiant 33 not out after Shakib bowled Glenn Maxwell (14) off the first ball of the second session, leaving Australia tottering on 199-8.

Cummins hit three fours and two sixes to bring his side achingly close to a win, but Shakib's spin partner Taijul brought the curtain down on the innings with his dismissal of Josh Hazlewood for nought.

Hazlewood, who was already nursing an injury, has been ruled out of the second and final Test of the series.

Prime Minister Sheikh Hasina, who was watching from the stands, waved the nation's flag as the jubilant players embraced and celebrated their historic win.

"It's a great feeling beating Australia, and I think it was a great effort by the boys, especially Shakib," said captain Mushfiqur Rahim of his all-rounder, who was named man of the match.

"Our performance in home conditions has been pretty consistent and against England also we were very close in the first Test and we beat them in the second Test.

"That's the belief we had and also our spinners did a great job," he added, saying Bangladesh would now be looking to seal the series.

A dejected Smith said his men could have performed better with the bat in the first innings when they scored 217, since the bounce and spin proved especially devilish the second time around.

"It was a great Test match. Credit to Bangladesh, the way they played," he said.

"The first innings, I thought the partnership between Shakib and Tamim really set the game up for them. I thought we fought back really nicely after that.

"We probably let ourselves down a bit in the first innings with the bat. We probably needed to make a few more there."

Australia have not played a Test in Bangladesh since Ricky Ponting's team visited in 2006, six years after Bangladesh were granted Test status.

They were due to play two Tests in the country in October 2015 but the tour was cancelled amid security fears after a wave of attacks by Islamist extremists in the Muslim-majority nation.

The second Test will be played in Chittagong from September 4-8.

Comments
Topics mentioned in this article
Bangladesh Cricket Team Australia Cricket Team Shakib Al Hasan David Warner Steven Smith Cricket
Get the latest updates on Fifa Worldcup 2022 and check out  Fifa World Cup Schedule, Stats and Live Cricket Score. Like us on Facebook or follow us on Twitter for more sports updates. You can also download the NDTV Cricket app for Android or iOS.