Sports Minister Rajyavardhan Singh Rathore on Thursday shot off a missive to his British counterpart and to the CGF President, asking them to intervene and ensure that the sport remains a part of the 2022 edition. 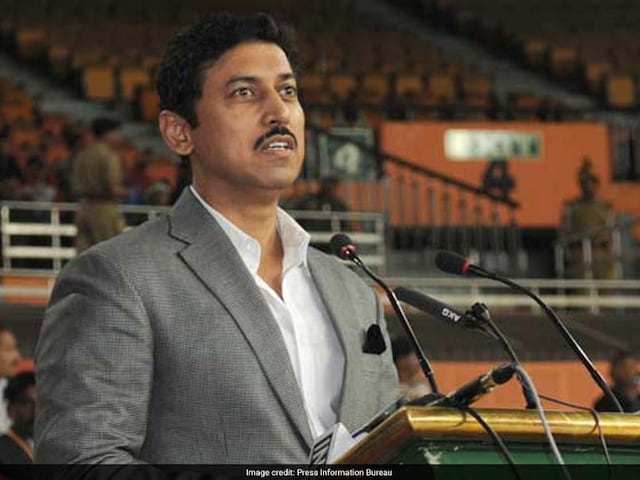 With shooting set to be dropped from the Birmingham Commonwealth Games' roster, Sports Minister Rajyavardhan Singh Rathore on Thursday shot off a missive to his British counterpart and to the CGF President, asking them to intervene and ensure that the sport remains a part of the 2022 edition. The Commonwealth Games Federation (CGF) has left it to the host nation, in this case England, to keep or remove shooting, which has always been an optional sport, from the schedule.

Rathore wrote not only to the CGF President Louise Martin but also sought intervention from Britain's MP Matt Hancock, who is Secretary of State for Digital, Culture, Media and Sport.

Rathore, himself an Olympic medal winning shooter, said removal of the sport from the CWG 2022 will create negative impact on the Indian and as well international shooters.

"Dropping the sport from the CWG, 2022 would come as a major setback to the large number of athletes in these countries who would be preparing for this competition and also the sport loving public who have watched and enjoyed this sport over so many Commonwealth and Olympic Games," Rathore wrote in his letter.

"I am, therefore, soliciting your kind intervention in the matter to retain Shooting as a sport in the CWG-2022, Birmingham," the Athens Games silver medallist in double trap wrote.

Birmingham has expressed its reservations about putting together facilities to host shooting events.

Rathore, in his letter, explained how the popularity of the sport has grown substantially in India and that training and competition venues for shooting have mushroomed all over the country.

"With the recent successes of Indian shooters at the world stage, a large number of youngsters are taking up shooting as a competitive sport and aspiring for excellence at the international level. I am sure that this would be the position in a number of countries," Rathore wrote.

"If shooting is axed from the Games roster, it would come as a massive blow to India, which has done quite well in the sport," Rathore wrote.

India is second in the CWG's all-time medal list for shooting, having won 118 medals, including 56 told, till the Gold Coast Games.

Comments
Topics mentioned in this article
Rajyavardhan Singh Rathore Shooting CWG 2018 India
Get the latest updates on IPL 2020, check out the IPL Schedule for 2020 and Indian Premier League (IPL) Cricket live score . Like us on Facebook or follow us on Twitter for more sports updates. You can also download the NDTV Cricket app for Android or iOS.