A record-smashing Mirabai Chanu and a perseverant P Gururaja claimed gold and silver respectively as weightlifters lived up to the pre-event hype by delivering opening-day medals for India while star badminton players added to the cheer by making a winning start in the 21st Commonwealth Games. 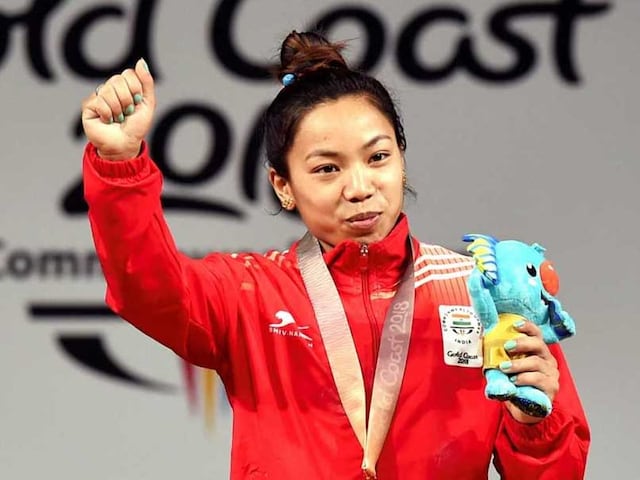 A record-smashing Mirabai Chanu and a perseverant P Gururaja claimed gold and silver respectively as weightlifters lived up to the pre-event hype by delivering opening-day medals for India while star badminton players added to the cheer by making a winning start in the 21st Commonwealth Games. Chanu smashed the Games records in 48kg category snatch, clean and jerk and overall en route her gold-medal winning performance, which fetched her a thunderous applause from the Australian fans, who queued up to take her autograph after the medal ceremony. Chanu managed to lift 196kg (86kg+110kg) in a remarkable effort.

"I was not expecting to break records but I certainly wanted to break them when I came here. I can't put in words, how it feels right now," an exhausted but jubilant Chanu told PTI.

Earlier, Gururaja survived a few anxious moments after two failed attempts in clean and jerk to claim a silver medal.

The 25-year-old son of a truck driver equalled his personal best of 249kg (111kg+138kg) to finish second in the event and ensure that India woke up to the news of a medal on the very first day of competitions.

"After I failed the first two attempts, my coach reminded me how much my life depends on this. I remembered my family and my country," he said when asked what went through his mind in those nervy moments.

M Raja (62kg) was the third weightlifter in contention today but he lost out to much superior competition and finished sixth overall with a total effort of 266kg (116kg+150kg).

Weightlifting was not the only reason why India could boast of a good opening day. The much-hyped shuttlers also made a winning start to their campaign, defeating Sri Lanka and Pakistan 5-0 respectively in the mixed team event matches.

Saina Nehwal, who was making headlines for her ferocity in getting Games Village accreditation for her father, brought quite a lot of it on court as well and dispatched her rival Madushika Beruelage in a mere 22 minutes.

She was later in action against Pakistan as well and was her usual clinical self against Mahoor Shahzad, claiming a straight-game triumph in 26 minutes to ensure that India had a winning day to celebrate.

Veteran Manoj Kumar (69kg) was the lone boxer in action today and the 2010 CWG gold-medallist hammered Nigeria's Osita Umeh to move into the pre-quarterfinals. The former Asian medallist won on a unanimous decision.

On the squash court, Dipika Pallikal and Joshna Chinnappa, who would be defending their women's doubles gold medal, made winning starts in their singles competitions.

While Pallikal got the better of Trinidad and Tobago's Charlotte Knaggs, Chinnappa sailed past Papua and New Guinea Lynette Vai.

"It's hard because this is the biggest thing for us squash players and I planned a lot over the last year and put in a lot of hard work. Obviously it hasn't worked out and it's something I have to live with for the rest of my life," the dejected world No.13 Ghosal said after the loss.

"It wasn't the best match to play from the first point. It was not the way I was taught to play squash. I guess you have to find a way whatever circumstances you are in, but I couldn't find that way to win," he added.

The table tennis players got past their initial hurdles rather easily with the women's team defeating Sri Lanka 3-0. The men's team blanked Trinidad and Tobago 3-0 before beating Northern Ireland by a similar margin.

Apart from Ghosal, the other major disappointment was the women's hockey team's stunning 2-3 defeat against Wales in its lung-opener.

In the swimming pool, Virdhawal Khade qualified for the semifinals of the 50m men's butterfly event but could not make the final, finishing 15th overall. Sajan Prakash failed to even make the semifinals in the same event.

The Indians were not much of a force on the cycling track either, finishing sixth in the Women's Team Sprint, which ruled them out of medal contention. The men's team did even worse, finishing seventh in their competition.

Comments
Topics mentioned in this article
Weightlifting CWG 2018 India
Get the latest Cricket news, check out the India cricket schedule, Cricket live score . Like us on Facebook or follow us on Twitter for more sports updates. You can also download the NDTV Cricket app for Android or iOS.