India held on to their third spot in the overall tally, behind hosts Australia and England. The Indian contingent has so far collected 11 gold, four silver and six bronze medals. 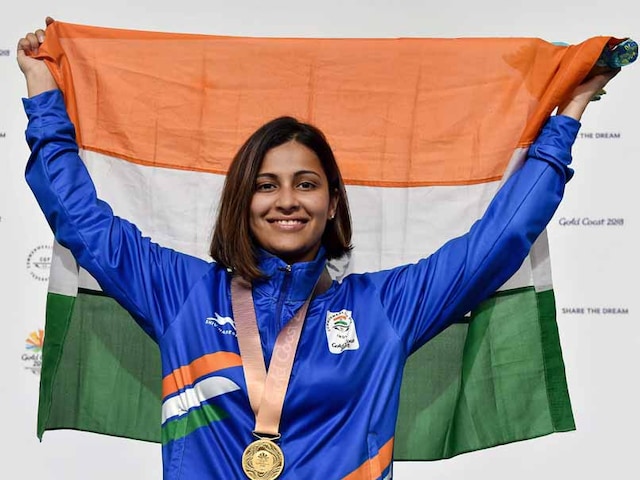 Pistol shooter Heena Sidhu shone the brightest with a gold and a Games record, while para-powerlifter Sachin Chaudhary put behind a dope-tainted past to claim a surprise bronze as the Indian juggernaut slowed down a bit after five days of gold rush at the Commonwealth Games here. With weightlifters through with their campaign, wrestlers yet to take off and boxers only getting into medal rounds, the number of medal were not too many to show on day six of the Games. However, India held on to their third spot in the overall tally, behind hosts Australia and England. The Indian contingent has so far collected 11 gold, four silver and six bronze medals.

The ranges at Belmont Shooting Centre in Brisbane were expecting to boom with strong Indian performances but it wasn't a particularly great start as Gagan Narang and Chain Singh finished outside the medal bracket in the 50m rifle prone event.

However, Sidhu made up for it to an extent by shooting down the gold as well as the games record in the women's 25m pistol event. Heena notched up a new CWG record of 38 points in the final to take the title in style Elena Galiabovitch of Australia scored 35 to take silver while Malaysia's Alia Sazana Azahari got bronze with 26.

"I am exhausted, those are my thoughts on today's performance," Sidhu quipped while speaking to PTI.

"Thankfully, my trigger finger which has been giving me some trouble because of a tingling sensation was alright today", she added referring to a nerve problem she has been battling for the last few months.

At the Carrara Sports and Leisure Centre, Chaudhary gave India India their only other medal of the day in para powerlifting with an effort of 181kg in the men's heavyweight final.

The medal was redemption of sorts for Chaudhary, who was banned for two years after failing a dope test in 2014. He had tested positive for the anabolic steroid methandienone and testosterone abuse in June that year.

Without dwelling on his past, the lifter merely said he expects the medal to change things for good for him.

"In India, the Commonwealth Games is regarded as one of the most prestigious sporting events. This is a life-changing moment for me, he said.

It was a brilliant day for the boxers at the Oxenford Studios, where all five in action assured themselves of medals by advancing to the semi-finals. Among them was veteran Manoj Kumar (69kg), a gold-medallist from the 2010 Commonwealth Games in Delhi.

The boxers have so far guaranteed themselves six medals in all as, among the women, M C Mary Kom (48kg) is also through to the semifinals.

I won't say it has been a very strong performance so far but certainly it has got us results. There are things I want the boys to improve but I am not complaining at all, we are winning, Indian boxing's High Performance Director Santiago Nieva said.

There were some strong performances in the track and field events as well with Muhammad Anas Yahiya improving his personal best and breaking the national record for a third time to finish a creditable fourth in the men's 400m final.

"I am proud of myself," declared a panting Anas after clocking a new personal best of 45.31sec, improving his previous by 0.01 second.

In the women's 400m women's semifinals, the 18-year-old Hima qualified for the final with a personal best of 51.53 seconds.

She had finished third in her semifinal, taking off 0.44 seconds off her previous personal best, but eventually made the cut as the seventh fastest among eight finalists.

Medal hopes will once again hinge on shooters on Wednesday when Jitu Rai takes aim in the 50m pistol event, having already claimed the 10m gold.

Boxing star Mary Kom would be aiming to enter the finals, while star shuttler Saina Nehwal and P V Sindhu will begin their quest for individual medals after the mixed team gold.

Comments
Topics mentioned in this article
Other Sports CWG 2018 India
Get the latest Cricket news, check out the India cricket schedule, Cricket live score . Like us on Facebook or follow us on Twitter for more sports updates. You can also download the NDTV Cricket app for Android or iOS.