Saurav Ghosal, individual event bronze medal winner in the 2006 and 2010 Asian Games and a team bronze winner in the latter edition, is seeded fourth in men's singles at the Commonwealth Games. 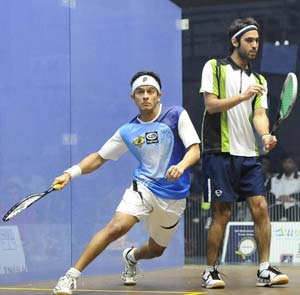 India's star player Saurav Ghosal is expecting two medals from the squash courts at the Commonwealth Games in Glasgow, Scotland.

"I would say two but it can be nil also. The main challenge would be from the players representing England, Australia, New Zealand and Malaysia," said the 27-year-old World no 16 at the Cricket Club of India here on .

Ghosal, individual event bronze medal winner in the 2006 and 2010 Asian Games and a team bronze winner in the latter edition, is seeded fourth in men's singles at CWG.

England's trio of defending champion Nick Matthew, last edition's silver medallist James Willstrop and the man who conquered Ghosal in the pre quarters at Delhi four years ago -Peter Barker - are the three men ahead of the Indian hope in the seedings.

This has smoothened his passage somewhat, feels the Kolkata-born Ghosal.

Ghosal is to partner Harinder Pal Sandhu in the men's doubles and India's top woman player Dipika Pallikal in the mixed doubles in the CWG while Dipika would partner Joshana Chinappa in the women's doubles.

Ghosal said his decision to play in the CCI-PSA international tournament in progress here was to get good match practise for the CWG squash championship commencing on July 24.

"I normally do not play 25000 dollar events but am playing this to get good practise for the Commonwealth Games. I have a tough first round (tomorrow)," he said adding he and his teammates would be in Scotland five days ahead of the CWG Games Opening.

Looking ahead to the Asian Games beginning on September 19 at Incheon, Ghosal said things have become tougher in this quadrennial event where there is a team championship gold to fight for.

"Four years ago there were 4-5 good players in Asia but now I would put it between 8 and 9. Anyone from India, Pakistan, Malaysia, Hong Kong and Kuwait can win the men's singles," he reckoned.

"I feel we can go all the way to the gold except in women's singles because of the presence of World No.1 Nicol David (Malaysia)," said Ghosal.

Mahesh Mangaonkar, who is now based in Belgium, said he was taking part in the PSA event here to win valuable ranking points.

"I am looking forward to win ranking points. This tournament offers me a good experience and is also a good preparationÂ  for the Commonwealth Games as there are players in the top 50," said the city-born player.

Comments
Topics mentioned in this article
Other Sports CWG, 2014
Get the latest updates on ICC Women's Cricket World Cup 2022 and IPL 2022, check out the Schedule , Live Score and IPL Points Table. Like us on Facebook or follow us on Twitter for more sports updates. You can also download the NDTV Cricket app for Android or iOS.