Canada's Patricia Bezzoubenko became the queen of Glasgow Games with a five gold medal haul - two in team and all round events and three in clubs, ball and hoop individual disciplines. 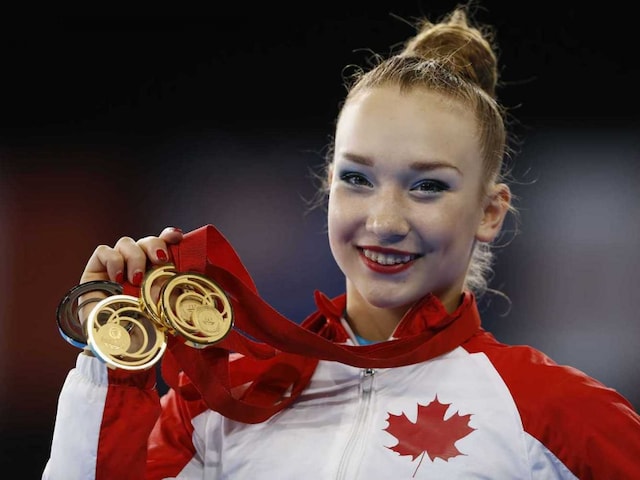 Bezzoubenko had already won two golds in the team and all-around events and she added three more on Saturday in the clubs, ball and hoop individual disciplines.Â  (CWG Day 3 Wrap)

The one gold that escaped her grasp was in the ribbon which went to Francesca Jones giving Wales their first gold medal of the Games. (Indian shooter Apurvi Chandela wins gold)

The other gold to be won early on in the third day of competition went to Australia's Daniel Repacholi in the men's 10m air pistol. (CWG: Bronze for Indian judoka Rajwinder Kaur)

But the toast of the town in that event was third-placed Mick Gault of England who at 60 won a record-equalling 18th Commonwealth Games medal.

New Zealand meanwhile crushed Canada 39-0 to get the Rugby Sevens tournament underway on a day when 27 gold medals were up for grabs notably in swimming, judo, shooting and cycling.

Set to make its Olympic debut in Rio in 2016, rugby union sevens, will have the chance to shine at Rangers' Ibrox Stadium.

The line-up is staggeringly strong for the abbreviated form of the game with all-conquering New Zealand bidding to maintain their remarkable unbeaten record and bid for a fifth successive gold medal that was kicked off by the Jonah Lomu-inspired triumph in Kuala Lumpur in 1998.

In netball, the two title favourites, Australia and England, played out a group stage thriller which the Australians edged 49-48.

In the morning qualifying session in the swimming pool there was more success for Scotland as Cameron Broady went faster that Olympic champion Chad le Clos in the 100m butterfly after being inspired by fellow Scots Ross Murdoch and Dan Wallace.

And Broady is determined to claim a fourth Scottish gold in the first final of Saturday's evening session.

"A silver or a bronze is not good enough now, Daniel Wallace and Ross Murdoch have been in there and got gold. I want to be part of that group, so let's see what I can do tonight."

Broady qualified fastest ahead of reigning Commonwealth champion Le Clos in a time of 1min 57:28sec.

However, Le Clos insisted he still has plenty to give in his favourite event, having already claimed a silver and bronze medal on Friday.

There will be another Scotland against South Africa clash later on Saturday when Murdoch goes for a second gold in the 100m breaststroke against Olympic champion Cameron van der Burgh.

England's Adam Peaty is also expected to have a say, though, as he broke the Commonwealth Games record in qualifying fastest for the final.

It was a more comfortable morning for the favourites in the men's 100m freestyle as world champion James Magnussen eased into the semi-finals with the fastest time ahead of teammate Cameron McEvoy.

Magnussen was surprisingly beaten by McEvoy at the Australian nationals in April and they are expected to battle it out for gold in Glasgow.

England's Fran Halsall continued her fine start to the meet with another Commonwealth Games record of 25:64 sec as the defending champion cruised into the semi-finals of the 50m butterfly.

Halsall will go for her first gold of the 2014 Games in the 50m freestyle later on Saturday against Australian 100m freestyle world champion Cate Campbell.

And Australia comfortably qualified as the fastest team for the women's 4x200m freestyle relay ahead of New Zealand and England respectively.

Bolt's arrival in Glasgow, meanwhile, was sure to add a huge scattering of stardust to a event that saw another athletics giant, Mohammad Farah, pull out on the opening day due to illness.

He said: "We've got quality athletes that want to come here and want to be part of this and it's great that he's going to be here.

Comments
Topics mentioned in this article
CWG, 2014 Gymnastics
Get the latest Cricket news, check out the India cricket schedule, Cricket live score . Like us on Facebook or follow us on Twitter for more sports updates. You can also download the NDTV Cricket app for Android or iOS.