We played to the plan: Johan Botha

Following the 50-run win over South Australian Redbacks in the Champions League Twenty20 on Sunday, Warriors captain Johan Botha said his team played to the plan and was now looking forward to the challenges ahead. 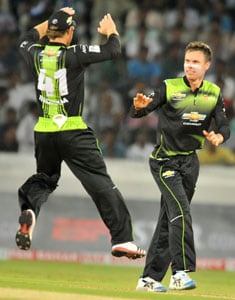 Following the 50-run win over South Australian Redbacks in the Champions League Twenty20 on Sunday, Warriors captain Johan Botha said his team played to the plan and was now looking forward to the challenges ahead.

"Two out of two at the start of the tournament is always important," he told reporters after Warriors scored their second successive win in the tournament.

He was all praise for Jon-Jon Smuts, whose knock of 88 off 65 balls helped the South African team set a huge total of 171 in 20 overs.

"After 12 overs, we relaxed a little bit but the guys took it to 170. We knew it was not going to be easy for the team batting second," he said.

Botha said he was looking forward to the next match against Kolkata Knight Riders on Oct 1.

"Three out of three will take us to the knockout. Our goal is to go to the play-offs. Then we will be two away from winning it (tournament)," he said.

In the last group B match, Warriors will face Somerset, one of the three qualifiers for the main tournament.

"They have good international players. It is not going to be easy but the way we are playing at the moment, we are looking forward to the challenge," Botha added.

"Obviously it was great performance. Today it was me. Tomorrow someone else will be there," said Smut, who also claimed one wicket.

"The track was good to bat for six hours but after that it got slow. It was bit difficult from 7 to 14 but obviously we got used to these conditions," he said.

Losing captain Michael Klinger felt that his side did not execute the basic skills well. "They have done better than us," was how he summed up the outcome.

"We gave away too many runs at the start. We did not execute the bowling well and then we kept loosing wickets regularly and the run rate kept going up," he said.

The skipper, however, said they got enough match practice before and also after arriving in India. "This is not excuse," he said and hoped that his team would lift its game in the remaining three group matches.