According to a official of the Faisalabad association, the players of Faisalabad Wolves which went to India by virtue of being the national T20 champions were unhappy at only getting paid around 600,000 rupees each. 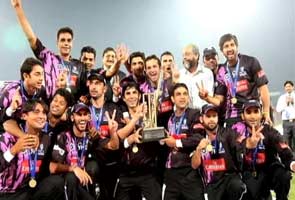 A dispute has erupted between the Pakistan Cricket Board (PCB) and the Faisalabad cricket association over disbursement of payments to players who went to India for the Champions League tournament this year.

According to an official of the Faisalabad association, the players of Faisalabad Wolves which went to India by virtue of being the national T20 champions were unhappy at only getting paid around 600,000 rupees each.

"They are unhappy because the participation fee the PCB got from the Champions League organizers is around USD 500,000 dollars which is equavalent to Pakistani 50.3 million rupees," he said.

"In these circumstances the players appear justified in their protest as some of them have returned the cheques to the board," he said.

The Faisalabad Wolves team led by Pakistan's test and one-day captain, Misbah-ul-Haq didn't feature many top players and were ousted in the qualifying rounds of the Champions League.

Interestingly, even last year when the Shoaib Malik led Sialkot Stallions team went to the Champions League in Sialkot they also complained about the low payments made to them by the board out of the participation fees they got from the organizers.

"It is unfair we are getting paid just 675,000 rupees while the board is taking the lions share of the money," one player said.

But a senior official of the board told PTI that they had not recieved complete 500,000 dollars as nearly 100,000 was deducted in taxes by the organizers as per rules.

"As far as the Champions League is concerned there is a fixed formula for sharing the money with the players and we have done that...bear in mind that with no international cricket in Pakistan since 2009 we have to rely on the fees we get from the ICC and other international events like the Champions League to finance and subsidize our full domestic season for regional cricket," he explained.

Comments
Topics mentioned in this article
Cricket Sachin Ramesh Tendulkar Ricky Ponting Misbah-ul-Haq Zulqarnain Haider Champions League Twenty20 2011
Get the latest updates on ICC Women's Cricket World Cup 2022 and IPL 2022, check out the Schedule , Live Score and IPL Points Table. Like us on Facebook or follow us on Twitter for more sports updates. You can also download the NDTV Cricket app for Android or iOS.