Amitabh Bachchan, Aamir Khan, Karan Johar, Yuvraj Singh, Virat Kohli and MS Dhoni were some of the big names at a private dinner party hosted by Sachin Tendulkar at a hotel in Andheri East on Monday. 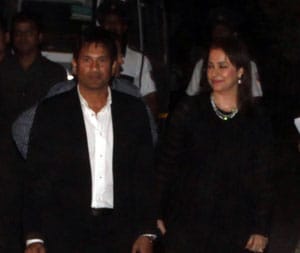 The Bollywood glitterati, business tycoons, politicians and members of the Indian cricket team were in attendance at a dinner party thrown by Sachin Tendulkar in a hotel in Andheri East on Monday. The 40-year-old Tendulkar retired from cricket on Saturday. Among the prominent Bollywood stars were Amitabh Bachchan, Aamir Khan, Rahul Bose and director Karan Johar. Tendulkar's guru and coach Ramakant Achrekar was among the select gathering. (Related: Sachin plans to write an autobiography) 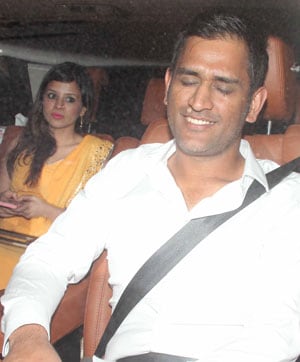 It's been a busy few days for Tendulkar. After an emotional farewell from his teammates and a packed Wankhede Stadium on Saturday, Tendulkar, on Sunday evening, spoke to the media for the first time since hanging up his boots. "After 24 years, give me at least 24 days to rest before I decide on my next moves," he had told the media. But it is very unlikely that the darling of Indian cricket, even after he has retired, is going to relax anytime soon. Monday, surely, was a long night. (Dedicate Bharat Ratna to all mothers: Sachin)

Monday's party was a private affair but with the who's who of the nation in attendance, how could the media be far behind. Flashbulbs popped and TV cameras whirred as celebrities walked in. The attention on Tendulkar just refuses to go away. Given the high security, media reporters were kept at bay and all efforts to grab a quote or two went in vain.