The Bombay High Court is seeking reply of a PIL on conflict of interest from the BCCI in the Indian Premier League and Champions League Twenty20. 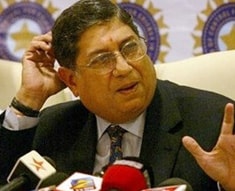 Hearing a public interest litigation which objects to certain changes in rules of Board of Control for Cricket in India, alleging that the changes were made only for the sake of it's president N. Srinivasan, the Bombay High Court Friday refused to stay the operation of these rules.

The High Court, however, asked BCCI and Srinivasan to file replies within a month to the petition, filed by Cricket Association of Bihar.

"It is not possible to grant interim relief, we are looking at the rules and not the personalities," said the division bench of SJ Vajifdar and Gautam Patel.

The PIL challenges the amended regulation 6.2.4 which says that except IPL and Champions League Twenty-20, no administrator, officer, player or umpire shall have any direct or indirect commercial interest in the matches or events conducted by the cricket board.

Petition points out that IPL and Champions League 20-20 were left out only to benefit N. Srinivasan (who owns the IPL franchise Chennai Super Kings).

The petition also challenges amendment to clause 15, whereby rules for election of president were revised. As per the original rules, each zone could elect the BCCI President by rotation, but the amendment provided that a zone can nominate a person from outside that zone too, and this was meant to benefit Srinivasan, the PIL says.

The court on Friday said that before considering request for stay to these amendments, it would hear the board and it's chief.

Comments
Topics mentioned in this article
Cricket Robert George Dylan Willis Champions League Twenty20 2011 BCCI
Get the latest updates on India vs Australia and check out  Schedule, Results and Live Score. Like us on Facebook or follow us on Twitter for more sports updates. You can also download the NDTV Cricket app for Android or iOS.