Having made a sensational start with a thrilling win over Royal Challengers Bangalore, South African team Warriors would look to build on the impressive beginning when they take on South Australia Redbacks in their Champions League Twenty20 Group B match on Sunday. 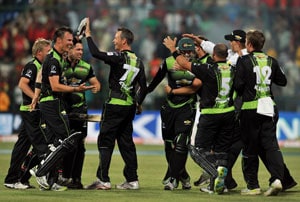 Having made a sensational start with a thrilling win over Royal Challengers Bangalore, South African team Warriors would look to build on the impressive beginning when they take on South Australia Redbacks in their Champions League Twenty20 Group B match on Sunday.

The South African side straight away sounded warning bells for the other sides by chasing down an imposing target of 173, set by Bangalore in their opening match.

Their strength is the deep batting line-up with skipper Johan Botha coming as late as number six and still scoring a match-winning knock along with opener Ashwell Prince.

While Warriors are a star studded side with the likes of Prince, Colin Inagram and Mark Boucher in their ranks, Redbacks have only one established name in paceman Shaun Tait.

Yet, Redbacks are a young side and expected to give the Warriors a good fight.

Callum Ferguson has the experience of playing international cricket as he has done national duty for Australia in 30 ODIs and the side would look up to him for an all-round performance.

Nathan Lyon, who rose from a groundsman to Test bowler, is another player to watch out.

Lyon did well in Sri Lanka in his debut series and with wickets in India being spin-friendly, the off-spinner has good opportunity to further enhance his reputation.

Also, the Australian side will have the advantage of having acclimatised to the conditions in Hyderabad as they arrived in the city a few days ago.

Warriors bowlers would look to rectify the mistakes they committed against Bangalore. They leaked too many runs but the batsmen made up for that.

Lonwabo Tsotsobe, Wayne Parnell, Botha and Nicky Boje are all experienced campaigners and they would be eager to do well and help the side strenghthen their position in the tournament.