Somerset made a remarkable fightback with a superb bowling show after Craig Kieswetter shone with the bat as they defeated Warriors by 12 runs to qualify for the semifinals in the Champions League Twenty20 on Wednesday. 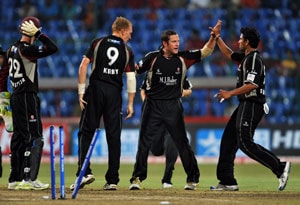 Somerset's captain Alfonso Thomas bowled two strangling spells to ensure his side beat Warriors and qualified for the semi-finals of the Champions League Twenty20. Warriors' loss meant their net run-rate fell below that of Royal Challengers Bangalore and they became the second South African team, after Cape Cobras, to bow out of the tournament in two days.

Ironically, it was the performance of three South Africa-born players that contributed most to Somerset's victory. Thomas' 2 for 16, Craig Kieswetter's unbeaten 56 and Roelof van der Merwe's all-round effort closed the door on Warriors.

With the ball turning, and not coming on to the bat, Warriors had to be careful not to fall too far behind the required run-rate. They slipped in the middle stages but it was only in the 19th over - with 23 runs needed off 12 balls - that the match went beyond their grasp. Thomas bowled slower balls throughout, and when he removed big-hitting Craig Thyssen and Wayne Parnell in the same over, the task became too great for Warriors.

They had started positively, as Ashwell Prince and JJ Smuts scored 24 runs in the first three overs. Prince was the first batsman undone by the lack of pace but Smuts formed a solid partnership with Ingram. They battled through a lean patch but struggled to find the boundary, especially against Thomas and young Adam Dibble, who bowled a tight second spell after conceding 13 runs in his first over.

After steering Warriors to 79 in the 12th over, however, both Ingram and Smuts were dismissed in the space of five balls and the new Warriors batsmen could not keep up. Johan Botha, batting at No. 5, tried to take Steve Kirby on but sliced a slow and wide ball high to Arul Suppiah in the deep, who put it down. Three balls later, Botha did the same thing and was caught at long-off.

Nicky Boje and Thyssen were left to score 46 runs from 27 balls. Both tried a few shots but with Somerset's bowlers not giving much away, they were unable to set-up the win. The margin of defeat was a sizeable 12 runs in the end.

Warriors had started the game brightly, with the wicket of Peter Trego, who was caught behind in the first over after Lonwabo Tsotsobe created pressure with his short of a length deliveries. That good work was completely undone by Wayne Parnell in the second over. Parnell bowled a poor line, conceded 13 runs, and did not bowl for the rest of the innings.

Kieswetter took advantage of Parnell's wayward leg-side line but it was van der Merwe who sunk his teeth into his countrymen, taking 16 runs off Tsotsobe's second over. Somerset's acceleration prompted Botha to change the pace and he introduced left-arm spinner Smuts, who bowled too short in his first over. van der Merwe caned Smuts for two more fours but succumbed to his attacking instinct, top-edging a slog sweep to midwicket to fall for 32 off 16 balls. Botha and Boje took control between overs seven and ten, giving away 18 runs and only one boundary, as they tied Kieswetter and James Hildreth down.

Rusty Theron started his spell with a wide ball that was hit through point for four but recovered well, with fuller and slower deliveries that could not be punished. Botha also juggled his spinners to good effect but four shots spoiled his effort: Kieswetter's pull over midwicket off Botha, Jos Buttler's two sixes off Boje - the second of which was the second biggest of the tournament - and Buttler's straight smack over the sightscreen off Smuts.

Tsotsobe and Theron had to bowl at the death and used variations such as cutters and slower balls. Most of their deliveries were on target but Kieswetter punished anything that wasn't. He hit boundaries in three of the last four overs, and was the reason Somerset were able to score 36 runs off them.

Comments
Topics mentioned in this article
Cricket WAR Champions League Twenty20 2011 SOM MS Dhoni Suresh Raina Davy Jacobs
Get the latest updates on India vs Australia Series, check out the India vs Australia Schedule for 2020-21 and Ind vs Aus live score . Like us on Facebook or follow us on Twitter for more sports updates. You can also download the NDTV Cricket app for Android or iOS.