A dominant performance by the Warriors helped them win their second match in three days, this one a composed and clinical victory over South Australia. 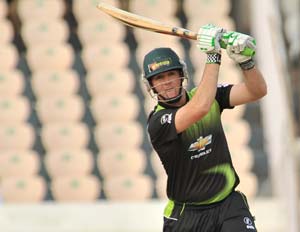 A dominant performance by the Warriors helped them win their second match in three days, this one a composed and clinical victory over South Australia. JJ Smuts' smashing 88 propelled them to an imposing total that proved too much for South Australia to chase. Smuts batted for all but seven balls of the innings and shared in two meaty partnerships, with Colin Ingram and Mark Boucher, that formed the foundations of their innings. The Warriors bowlers had plenty of runs to play with and, unlike their opponents, made good use of variation on a slow, dry pitch to frustrate the South Australia batsmen.

South Australia had early success when Ashwell Prince was bowled by the pacy Shaun Tait in the second over. But they were unable to build on that, as Smuts and Colin Ingram hit top gear in the Powerplay. Smuts dispatched Adil Rashid, who opened the bowling, and showed no fear in taking on Tait, regardless of whether he bowled full or short. Ingram swept impressively, particularly against Nathan Lyon, and the pair raced to 59 from six overs.

Lyon and Aaron O'Brien gave away only one boundary from the next two overs, but it was when Harris came on that the runs dried up. He bowled a good wicket-to-wicket line and frustrated Ingram, who tried to take him on at the start of the 11th over. The South African latched onto a short ball but didn't have enough on it to carry cow corner and was caught.

With Smuts tiring and Boucher battling to find his feet upfront, Christian and O'Brien pulled the run-rate down to under eight an over. Smuts continued to punish the short balls and Boucher finally got going with a lofted shot over O'Brien's head that went for four.

Tait's inconsistency allowed both Smuts and Boucher to ready themselves for an innings-ending burst. Smuts dealt with his full deliveries in smashing style and Tait bowled a no-ball, sprayed five wides down the leg-side and battled to get the yorker right consistently. It was into Tait's hands that Smuts eventually fell though. He looked well placed to get a century, but was dismissed trying to play an innovative scoop over short fine leg off Harris. Christian took two wickets in the final over to stop the Warriors from exploding at the end.

Against a dynamic attack, South Australia never really looked in the chase. Lonwabo Tsotsobe was able to get a hint of movement and angled the ball across the right-hander. Daniel Harris was uncomfortable with the angle and when he tried to bash one through the covers, got a nick and was caught behind. Tsotsobe's accuracy earned him a second wicket, that of Tom Cooper, who fed a simple catch back to him.

Rusty Theron was at his best, mixing up the yorkers and slower balls with ease. He was rewarded when Callum Ferguson failed to read the change of pace and hit a slower ball straight to Ingram on the edge of the circle. With South Australia falling far behind the required run-rate, the captain Michael Klinger decided to take the on the spinners. He smacked Nicky Boje over long on but was trapped lbw by a sharply turning Johan Botha delivery.

Cameron Borgas looked to do the same thing and cracked Smuts for a four and a six, before holing out to long-on, where Tsotsobe took the catch. Wayne Parnell was only introduced in the 11th over and continued in the same vein as his colleagues, making good use of the short ball. In his second spell, he started with a good length ball and bowled Tim Ludeman. Christian hung on until the end but was unable to pull off the spectacular as Parnell and Botha wound the match down and the Warriors completed a comfortable win.