Redbacks' Klinger confident of a win 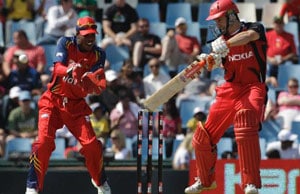 "Our strength is balance. My team has the right mix of old and new," Klinger told mediapersons at the team hotel here Saturday.

"We have a set of experienced players like Shaun Tait, Daniel Harris and myself. Then we have very talented youngsters like Nathan Lyon, Kane Richardson and Tom Cooper. This makes us very confident," he said.

Berry, who took over as Redbacks coach last December, said the presence of a nippy pacer like Shaun Tait was a big advantage for his side, which bowed out last year from the semi-final stage of the Champions League.

"Last time we remained two steps away from winning the League. This time we hope to override that blockade," Klinger said.

The skipper was happy with the practice the team had in Adelaide before coming here. "The team looks to be sharp and in good shape," he said.

However, he admitted that the going would be tough with all the ten teams having world class players. "But last time we won against both the Chennai and Bangalore franchise and that gives us a lot of heart."

The nagging drizzle and a cloud cover have kept the team management worried as they desperately wait to start their practice on Indian soil before flying to Bangalore for the inaugural show Sep 22.

"We really hope that we can get some practice matches under our belt," said Berry.

The coach said acclamatising to the Indian conditions would not be a problem as the players were in good nick.

The Redbacks begin their Group B campaign here against Chevrolet Warriors of South Africa Sep 25.

Comments
Topics mentioned in this article
Shaun Tait Cricket Michael Klinger Champions League Twenty20 2011
Get the latest updates on ICC Women's Cricket World Cup 2022 and IPL 2022, check out the Schedule , Live Score and IPL Points Table. Like us on Facebook or follow us on Twitter for more sports updates. You can also download the NDTV Cricket app for Android or iOS.