I want to cherish memories of playing with Royals: Rahul Dravid to NDTV

Despite challenges on and off the field, Rahul Dravid tells NDTV that being part of the franchise for three years was spectacular and that he will always fondly remember playing his final competitive cricket for the franchise. 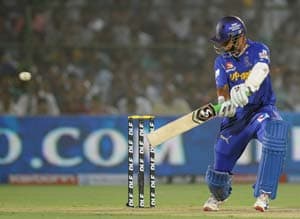 An emotional Rahul Dravid will take back fond memories from his time spent playing for the Rajasthan Royals and told NDTV on Monday that despite the several highs and lows, the journey was one of immense satisfaction.

Dravid's appearance in the Champions League T20 title clash against Mumbai Indians on Sunday was his final competitive match in a career spanning sixteen years. Replacing Shane Warne at the helm of the Rajasthan franchise in 2011 too was an important part of his career. "The whole journey has been very memorable. Yesterday was a good night and even though we lost, there were plenty of good things including the lovely reception I got from both teams. I will always cherish it," he said.

His team may have lost the match but Dravid - who batted at No. 8 for the first time ever - said he liked to put the team first. "Yes, the target was 200 and I needed to come down the order. Personally for me, it wasn't another game. The focus was on getting the team to win. Chasing 10-an-over is not my strength, especially not at 41, 42. So the tactics demanded it," he said.

Remembering the turbulent months earlier when three Rajasthan players were accused of spot-fixing, Dravid said that having led the entire team - through success and controversies - was an experience in itself. "The franchise has been through several ups and downs, both on and off the field. It (spot fixing scandal) was disappointing, disappointing that we had to go through all of that. But there are lessons to be learnt from that. In some ways everyone felt cheated. It was an extremely challenging time for everyone in the franchise," he said.

Dravid however revealed that the entire team has come out stronger and wished the Royals keep fighting harder in the time to come.

Comments
Topics mentioned in this article
Cricket Rahul Dravid Champions League Twenty20 2013 Champions League Twenty20 2011
Get the latest updates on ICC T20 Worldcup 2022 and CWG 2022 check out the Schedule, Live Score and Medals Tally. Like us on Facebook or follow us on Twitter for more sports updates. You can also download the NDTV Cricket app for Android or iOS.