Premier League chief executive Richard Scudamore has waded into the row over the cost of watching English top-flight football by expressing concern over ticket prices. 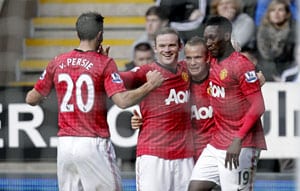 Premier League chief executive Richard Scudamore has waded into the row over the cost of watching English top-flight football by expressing concern over ticket prices.

Scudamore told the BBC Radio Five's Sportsweek programme that Manchester City fans had sent Arsenal "a message" after failing to sell their full allocation for Sunday's match at the Emirates Stadium.

City, the reigning Premier League champions and long one of England's best-supported clubs, returned 912 unsold tickets priced at £62 each ($100) to north London side Arsenal.

"I think they are sending Arsenal Football Club a very clear message," Scudamore said, with the Gunners having previously come under fire from their own fans over the cost of tickets.

"There is category pricing at Arsenal. Arsenal, when categorising games and setting prices next season, will have to take that into account," Scudamore added.

"Arsenal clearly, along with every other club, want a full stadium and we at the Premier League would like every club to take up their away allocation."

With the Premier League enjoying huge broadcasting revenues as a result of its global popularity -- a recently-signed deal with US television network NBC worth a reported $250 million (£155 million) alone -- it has been suggested ticket prices at all clubs could be reduced without doing significant damage to their finances.

Scudamore though said the issues was complex but stressed the league wanted to see as many away fans as possible at matches.

"Over the last 15 years we have managed to achieve 90 percent occupancy. This year occupancy is up at 95 percent and could well reach an all-time high this season.

"That hasn't come about just by going on increasing and increasing ticket prices. As a top priority we must keep away fans attending. Clearly it is for individual clubs to get that right."

One way put forward by some supporters groups to reduce ticket prices is for so-called 'safe-standing' areas to be introduced at grounds.

Following a report into the Hillsborough disaster in 1989, where 96 Liverpool fans were crushed to death while standing on terraces during an FA Cup semi-final with Nottingham Forest, English top-flight grounds were transformed into all-seater stadia.

And Scudamore said he did not expect to see the return of terracing.

"As an administrator it is a very difficult one. If anything goes wrong we are, and quite rightly, held to account.

"There are obviously ways and means of doing it but we have seen some incidences this year where being able to identify who is sat in which seat is a very useful thing to do.

"From a safety and security point of view, and all-round generally, I wouldn't want to take the risk (of re-introducing terracing)."

Comments
Topics mentioned in this article
Football English Premier League Manchester City Champions League Twenty20 2011 Mark Hughes Alex Ferguson
Get the latest updates on ICC T20 Worldcup 2022 and CWG 2022 check out the Schedule, Live Score and Medals Tally. Like us on Facebook or follow us on Twitter for more sports updates. You can also download the NDTV Cricket app for Android or iOS.