Ahead of their must-win Group A match against Trinidad and Tobago, Cape Cobras wicketkeeper Dane Vilas on Monday said his team is confident of seeing off Caribbean side's spin attack on the difficult MA Chidambaram strip. 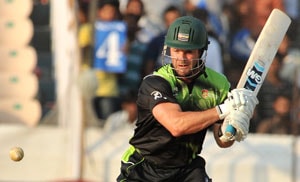 Ahead of their must-win Group A match against Trinidad and Tobago, Cape Cobras wicketkeeper Dane Vilas on Monday said his team is confident of seeing off Caribbean side's spin attack on the difficult MA Chidambaram strip.

"Luckily, we are playing them at the end, so they're not a completely unknown entity," Vilas said at the pre-match media conference here.

"We've done some work on them, they bowled brilliantly yesterday. I think the key to the game against Chennai was that they took the pace off (the ball) quite a lot. A lot of bowlers that we've faced have taken the pace off using different variations. So hopefully we've got that covered," he said.

Asked to name one area the team needs to improve upon, he said, "It's basically a quarterfinal for us, we have to win this game. We had a long pre-season. One key area we can improve on is probably our fielding. I think we have not been the fielding side we can be in this tournament "

Vilas said he is confident about the South African side's spin attack, despite it going for runs in the rain-hit match against Mumbai Indians in Bangalore, when the latter amassed 176/6 in 20 overs.

"We're very confident. (The Chennai and Bangalore pitches) are completely different. The one in Chennai helped spin, while the Bangalore one was a lot flatter and a better pitch to bat on.

Asked if china-man bowler Michael Rippon would get a look in against Chennai on a spin-friendly pitch, Vilas said, "I think we'll keep the same team, we're bowling well as a team. (But) guys like Andrew Puttick and Rippon are always ready (if picked)."

Comments
Topics mentioned in this article
Cricket Cape Cobras Champions League Twenty20 2011 Trinidad and Tobago
Get the latest updates on IPL 2020, check out the IPL Schedule for 2020 and Indian Premier League (IPL) Cricket live score . Like us on Facebook or follow us on Twitter for more sports updates. You can also download the NDTV Cricket app for Android or iOS.