Perth Scorchers pulled off a 16 runs victory over Auckland Aces on Tuesday in their Champions League T20 match at the Centurion. 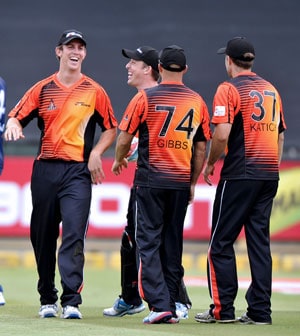 Delhi Daredevils made it to the Champions League Twenty20 semi-final after other contender Auckland Aces were beaten by 16 runs in their last group league game by Perth Scorchers on Tuesday.

The Scorchers victory means that Auckland Aces with six points were ousted as Delhi with 10 points and Nashua Titans with eight points are through. The match between Daredevils and Titans will decide as to who will meet the Lions and who would take on Sydney Sixers.

A victory for Auckland against Perth today could have opened up the group, but the Australian side's bowlers stuck to their task.

Chasing a modest target of 141, Auckland failed to capitalise on the 49-run second-wicket stand between opener Martin Guptill and Azhar Mahmood as they ended on 124 for eight in their stipulated 20 overs.

Perth clawed their way back into the match with four quick strikes in the middle overs.

Left-arm spinners Michael Beer and Brad Hogg and pacer Joe Mennie shared bulk of the spoils between them. Beer was the stand-out performer as the Victorian finished with impressive figures of three for 13.

For Auckland, Guptill top-scored with 32-ball 36 while Mahmood, who looked well set en route his 24, was caught by Herschelle Gibbs at extra cover off Beer.

Auckland were off to a bad start as they lost opener Lou Vincent (2) early into the innings.

Guptill and Mahmood took the team past 50-run mark with their defiant 49-run stand but once both were separated, the New Zealand T20 champions lost the plot and from a comfortable position of 61 for one were left struggling at 75 for five in 13 overs.

Their misery was further compounded by Mennie who struck twice in the 18th over to put paid to any hopes of Auckland advancing to the next stage of the tournament.

Earlier, an impressive bowing effort by pacer Michael Bates helped Aces restrict Scorchers to a score of 140 for seven after Scorchers skipper Marcus North won the toss and decided to bat in their last league fixture.

Bates finished with an impressive figures of 4 for 34 and picked up the wickets of Luke Ronchi and Joe Mennie in the last over of the innings right after he scalped Tom Beaton in his previous over. He also accounted for dangerman Herschelle Gibbs (6) in his first spell.

Beaton (22) and Paul Collingwood (38) resurrected the Scorchers innings after they were left reeling at 67 for three in 12 overs.

They put up a much needed 36-ball 51-run partnership for the fourth wicket to help the Australian side reach a respectable score.

After the early loss of Gibbs, North (37) and Simon Katich (21) combined well to put on 55-run partnership for the second wicket but the duo perished in quick succession.

North (37) was run-out after a direct hit by Kyle Mills while Katich (21) fell victim to spinner Ronnie Hira, who got the better of the southpaw's stumps.

North and Katich hit a flurry of boundaries with the skipper contributing with four hits to the fence and a single six.

When the momentum looked like shifted in Auckland's way, Beaton and Collingwood revived Scorchers' sagging fortunes with a defiant fifty-plus stand.

Collingwood hit five fours in his 27-ball stay at the crease before being run-out by Hira on the second ball of the last over.