Nothing less than a win will do for Cape Cobras and Trinidad &amp; Tobago when they clash on Tuesday in their last Champions League Twenty20 match of Group A, which is poised tantalisingly with all five teams still in with a chance of making it to the knockout stage. 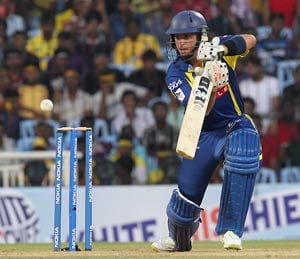 Nothing less than a win will do for Cape Cobras and Trinidad & Tobago when they clash on Tuesday in their last Champions League Twenty20 match of Group A, which is poised tantalisingly with all five teams still in with a chance of making it to the knockout stage.

Dubbed the 'Group of Death' prior to the start of the tournament, Group A heads into its final round of matches with no team still assured of a semifinal berth.

Topping the group and with a foot already in the last four stage are Mumbai Indians, who have overcome a debilitating injury situation to be at the forefront with five points. Next up is Australian side New South Wales Blues with four points, followed by Cobras with three.

T&T, who claimed the giant scalp of local favourites and defending champions Chennai Super Kings on Sunday, are in the fourth place with two points.

The Mahendra Singh Dhoni-led CSK, also on two points, are at the bottom by virtue of an inferior net run rate.

If the Cobras, who have only one win against New South Wales and a no result so far, win on Tuesday they will move to five points and may eke their way to the semis by virtue of a better net run rate than Mumbai Indians, who despite being group leaders have the worst net run rate among the lot.

NSW too will progress as group winners with six points if the Australian side win in their crucial match against CSK on Tuesday.

However, a defeat to either Cobras or NSW, will ensure Mumbai's progression to the semifinal, while forming a three-way tie among NSW, CSK and T&T - all with four points each, meaning the calculation will come down to run rate.

T&T, on the other hand, will have to beat Cobras and hope NSW lose to CSK to stand any chance of entering the semis. Any other result and they would be eliminated.

Comments
Topics mentioned in this article
Cricket MS Dhoni Suresh Raina Davy Jacobs Cape Cobras Champions League Twenty20 2011 Trinidad and Tobago
Get the latest updates on IPL 2020, check out the IPL Schedule for 2020 and Indian Premier League (IPL) Cricket live score . Like us on Facebook or follow us on Twitter for more sports updates. You can also download the NDTV Cricket app for Android or iOS.