Sent into bat, Trinidad and Tobago posted a challenging 188 for six against Titans in the Group B match, riding on a 109-run partnership between opener Lewis and Bravo for the second wicket at the Sardar Patel Stadium. 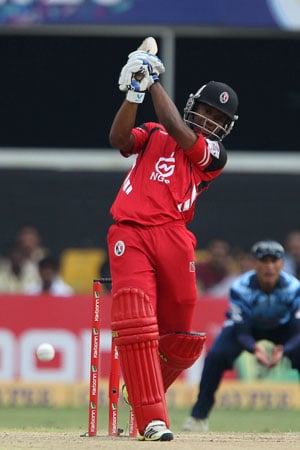 Evin Lewis (70) and Darren Bravo (63) hit blistering half centuries as Trinidad and Tobago registered a six-run win over Titans via D/L method in a rain-hit match to place themselves in strong contention for a semifinal berth in Champions League Twenty20 here on Monday. (Scorecard | Highlights)

Sent into bat, Trinidad and Tobago posted a challenging 188 for six against Titans in the Group B match, riding on a 109-run partnership between opener Lewis and Bravo for the second wicket at the Sardar Patel Stadium here. (Pics)

The Caribbean side then returned to restrict Titans to 153 for six in 17 overs, when heavy rains stopped play and the match was called off.

Calculated under the Duckworth/Lewis method, the par score was 159 and since Titans were behind at that point, T&T were adjudged the winners by six runs.

With this victory, T&T kept their hopes alive of a semifinal berth as they now have eight points from three matches, behind Chennai Super Kings (12) -- their opponents in the their last group match on October 2 in Delhi.

Lewis blasted seven fours and five sixes in his 35-ball 70-run innings, while Bravo hit five boundaries and four sixes in his 44-ball stay to lay the foundation of a big score for T&T. (Stats)

Chasing 189 to win, openers Henry Davids (42) and Jacques Rudolph (31) gave Titans a flying start, amassing 65 in 6.5 overs before the former was dismissed by Rayad Emrit.

First down batsman Heino Kuhn could not stay longer as he was sent packing by Samuel Badree in the 10th over. Lendl Simmon then struck twice in the next over, dismissing opener Rudolph and Roelof van der Merwe (4) as Titans slipped to 88 for four in 10.4 overs.

AB de Villiers (23) and Farhaan Behardien (29) then added 49 for the fifth wicket in 29 balls to resurrect the innings to an extent.

But T&T spinner Sunil Narine's twin strike -- Behardien and David Wiese (0) -- in the 16th over left the Titans at 137 for six in 15.5 overs. De Villiers and Mangaliso Mosehle (11) then added 16 runs when heavens opened up and the match was called off.