Bollywood brigade was all praise for Team India, which trump Pakistan in a nail-biting thriller at Mohali to sail into the 2011 World Cup finals scheduled to be played at the Wankhede Stadium here on April 2. 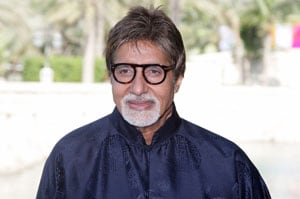 Bollywood brigade was all praise for Team India, which trump Pakistan in a nail-biting thriller at Mohali to sail into the 2011 World Cup finals scheduled to be played at the Wankhede Stadium here on April 2.

"INDIA beats PAKISTAN !!! Moves into the final with SriLanka. India breathes normally now..well played India, congratulations. The streets outside were jammed with revelers, screaming shouting waving the tri-color ... had not seen this in ages !! Now for the final," megastar Amitabh Bachchan wrote on micro-blogging site Twitter.

Pakistani actor-singer Ali Zafar said, "Pakistan beat everyone's expectation by coming this far. Well played India. Congratulations. Great "GAME" to watch. God bless everybody." Vijay Mallya said, "The Indian cricket team has managed wonderfully and peacefully to do what our Intelligence has failed to do-Keep Pakistan out of Mumbai!."

Son Sidhartha said, Awwwwweeesssooommmeee!!!! What a victory!! Well done to Boys in Blue...bring on Sri Lanka on Saturday!! Magical stuff!!!!...."

Actress Shilpa Shetty could not contain her excitement and broke down.. "INDIA WON...and I cried tears of joy! Class act by the Indian team, aggression with maturity, lethal combo! Deserve to be in the finals, fab job," she said.

Priyanka Chopra said, "Oh my god! What a show of class Team India! The world cup awaits you in Mumbai! Can you hear the unified sound of pure joy.. Indiiiiiiiaaaa."

Comments
Topics mentioned in this article
India Cricket Team New Zealand Cricket Team Pakistan Cricket Team World Cup 2011 Champions League Twenty20 2011 Harbhajan Singh Cricket
Get the latest updates on ICC T20 Worldcup 2022 and CWG 2022 check out the Schedule, Live Score and Medals Tally. Like us on Facebook or follow us on Twitter for more sports updates. You can also download the NDTV Cricket app for Android or iOS.