Below-par bowling let us down: Kemp

A disappointed Cape Cobras captain Justin Kemp on Tuesday blamed a below-par bowling performance by his side throughout the tournament for their elimination from the Champions League Twenty20 after losing at the hands of Trinidad and Tobago. 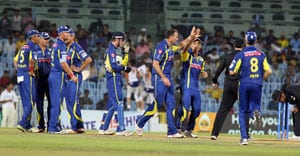 A disappointed Cape Cobras captain Justin Kemp on Tuesday blamed a below-par bowling performance by his side throughout the tournament for their elimination from the Champions League Twenty20 after losing at the hands of Trinidad and Tobago.

The Cobras, who made 137 for four after batting first on Tuesday, suffered a two-wicket loss in a thrilling Group A match after letting T&T off the hook at 105 for seven.

"It's disappointing, but to be fair we haven't bowled well at all, really. We've made crucial mistakes which you can't make at this level and unfortunately it caught up with us tonight. You can't be bowling three, four no-balls in one over, (which means) you're struggling. You're chasing a relatively low score, if you bowl a few wides too, it doesn't make it any easier," Kemp said at the post-match press conference

"I thought with three overs to go, we were really in there, Robin Peterson's first five balls (in the 18th over) were fantastic and obviously the last ball was a six, and they were back in it. (But) that's Twenty20, that's how it works.

Cobras pacer Dale Steyn leaked 15 runs in the 19th over after a magnificent early innings spell of 3-1-3-1," he said.

Asked if he had considered letting Steyn complete his quota of four overs early, Kemp said, "He bowled beautifully, he's one of the world's best death bowlers. I've got to bowl my best death bowler at the death, unfortunately it didn't work out. We didn't execute what we wanted to execute, and that's why we are going home."

Kemp, whose team nullified the impact of T&T's spinners by repeatedly charging down the track for even singles or two, denied it was a conscious ploy.

"Obviously we had a look at them more than the other guys. It's not the kind of wicket where you can just kind of hit them over the top. I was happy with the overall score, I don't think it was a below-par score," he said.

Comments
Topics mentioned in this article
Cricket Justin Kemp Cape Cobras Champions League Twenty20 2011
Get the latest updates on IPL 2020, check out the IPL Schedule for 2020 and Indian Premier League (IPL) Cricket live score . Like us on Facebook or follow us on Twitter for more sports updates. You can also download the NDTV Cricket app for Android or iOS.