Chief coach Paddy Upton said that the franchise would like to involve Dravid in the team's affairs, and that Shane Watson was his pick to replace Dravid as captain. 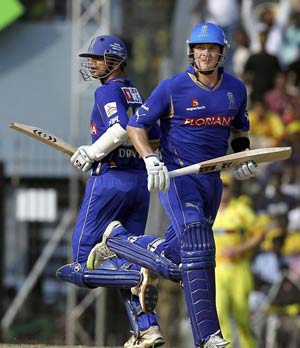 Paddy Upton, chief coach of the team, said after the loss in the CLT20 final on Sunday (October 6) that the franchise would like to involve Dravid in the team's affairs, and that Shane Watson was his pick to replace Dravid as captain.

"Shane Watson has been there from the beginning and he epitomises the Rajasthan Royals spirit, who places the team's needs ahead of his own needs," said Upton. "He is incredibly good with the younger players and is someone who bridges all the gaps in terms of the diversity of players we have ... he is also someone who contributes and adds value on and off the field. Maybe there will be someone else, but he would be a candidate.

"Rahul has been very integral to the way we have set things up at Royals. He is very approachable and we would very much like to have him involved going forward in some way or the other. He is very hands-on, so it won't be a token position if he were to be involved. Everything he stands for is very crucial to the Royals team." (Dravid thanks players, supporters for warm farewell)

In the final, Dravid pushed himself down the order to No. 8, coming in to bat with the team on 159 for 6 in their chase of 203. He scored just one run. Upton said that the decision was taken keeping in mind the requirements at the start of the chase. "We knew we had to go hard at the start and that doesn't play into Rahul's strengths," he said. "So we decided to go with Kusal (Perera). (Mumbai vs Rajasthan, as it happened)

"It's a testimony to the kind of person Rahul is. He said that when we are chasing 12 to 15 runs an over, it makes sense to put other people who are more equipped to do it ahead of him. He was playing his last game, but he put the team ahead of himself."

And, for the most part, the plan worked well. Rajasthan were on target while Sanju Samson and Ajinkya Rahane batted, but fell apart towards the end. "Things went according to plan but in a final, well, it's about who makes fewer mistakes and this was a different final in that a number of Mumbai players played some remarkable cricket," said Upton.

"We had plans to restrict them to 160 or so, but that didn't work. In the first 15 to 16 overs when we batted, we matched that with Sanju and Rahane, but the difference was that our back-end batsmen, who so often deliver for us, didn't this time. (Match stats)

"Had one of Watson, (Stuart) Binny, (Dishant) Yagnik or (Kevon) Cooper just stayed with Rahane for another 15 to 18 balls, it would be Rohit Sharma who would be sitting here instead of me."

Upton also confirmed that Rajasthan's decision to field after winning the toss was based largely on Mumbai's perceived preference of chasing. "We are quite comfortable chasing and we noticed that Mumbai prefer to chase because of their batting firepower," he said. "It was playing into our strength and against their preference ... we wouldn't have minded being asked to bat, but this is what we chose."

As for Samson, who has quickly made a big name for himself after getting a chance in the IPL earlier this year, Upton sounded confident about the future being bright for the young wicketkeeper-batsman. "He's shown everyone he has the skill," he said. "He's got an incredibly mature head on his shoulders. I see him as being very sound and solid. Does he have it in him to go the whole hog and spend some time there - absolutely, he has. He is a very promising prospect for Indian cricket."

Comments
Topics mentioned in this article
Rajasthan Royals Cricket Champions League Twenty20 2013 Shane Watson Ajinkya Rahane Virender Sehwag Sreesanth Rahul Dravid Ashish Nehra
Get the latest updates on IND vs NZ 2021, check out the Schedule and Live Score . Like us on Facebook or follow us on Twitter for more sports updates. You can also download the NDTV Cricket app for Android or iOS.