Mumbai Indians beat Rajasthan Royals to be crowned the 2013 CLT20 champions, but the result was dwarfed by the outpouring of sentiment towards Sachin Tendulkar and Rahul Dravid. 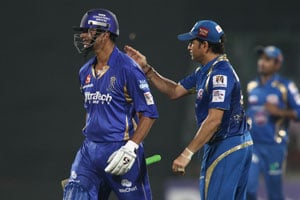 On Sunday evening at the Feroze Shah Kotla in Delhi, Sachin Tendulkar and Rahul Dravid bid goodbye to their limited-overs' careers. While Sachin had announced his retirement from the Indian Premier League, Dravid - who has not indicated as much - is likely to do the same. The Master Blaster will still be seen in Tests while the world rose as one to salute 'The Wall' for a final time.

The build-up to the Champions League T20 final between Mumbai Indians and Rajasthan Royals was dominated by the final 'confrontation' between Sachin and Dravid in any form of recognized cricket. Prior to the clash, in an interview with Ravi Shastri, both legends had nothing but words of praise for each other. While Dravid called Sachin an "inspiration", the latter said he always looked up to Dravid in times of difficulty.

Both players were given a guard of honour by their respective teams - Sachin not once, but twice! When they departed from the crease - both were co-incidentally bowled - Dravid and Tendulkar were given a raucous applause by those in the stadium and those watching at home. Social networking sites were flooded with emotional goodbye's to the two icons of Indian cricket. At the end of it all, Mumbai beat Rajasthan to be crowned the 2013 CLT20 champions, but the result was dwarfed by the outpouring of sentiment.

Shane Warne, who preceded Dravid as captain of a fledgling Royals side was one of the first to wish Rahul Dravid.

We Lost but not without a fight..So so proud of the Royals..Played so well..Will miss you Rahul Dravid,Cricket will miss you!

Rahul Dravid - I have never met a cricketer with such intelligence & abundant knowledge of the world he lives in.

Heaping praise on reigning IPL and CLT20 champions was Yuvraj Singh, who is on a high after his comeback into the national squad.

Congratulations to Mumbai Indians most consistent team this year! Rr outstanding tournament ! Rahul Dravid. Thank u for the memories

Going by the sentiments on Twitter, cricket will definitely be a lesser place without Rahul Dravid and Sachin Tendulkar.

Comments
Topics mentioned in this article
Cricket Champions League Twenty20 2013 Shane Warne Brian Lara Rahul Dravid Sreesanth Sachin Ramesh Tendulkar
Get the latest updates on ICC T20 Worldcup 2022 and CWG 2022 check out the Schedule, Live Score and Medals Tally. Like us on Facebook or follow us on Twitter for more sports updates. You can also download the NDTV Cricket app for Android or iOS.