Celtics coach Doc Rivers looked at his ageing team at the end of regulation, and he wasn't encouraged by what he saw. 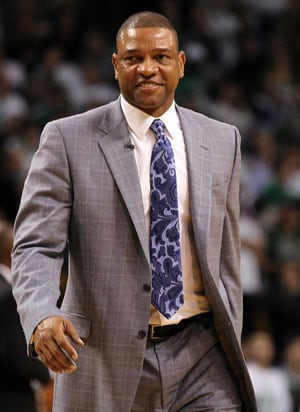 Celtics coach Doc Rivers looked at his ageing team at the end of regulation, and he wasn't encouraged by what he saw.

"They didn't look fresh," he said on Friday after Boston beat Atlanta 90-84 in overtime to take a 2-1 lead in their best-of-seven playoff series. "And, honestly, I looked at the other team - they looked pretty bad, too. So that made me feel a little bit better."

Rajon Rondo returned from a one-game suspension and recorded his seventh career playoff triple-double. The Celtics point guard had 17 points, 14 rebounds and 12 assists one game after sitting out for bumping referee Marc Davis in the closing minutes of the series opener.

Rondo did not have a basket in the first half of Game 3, and Rivers said he noticed Rondo struggling to run the offensive plays.

"Then, finally, I told him: 'Just be a scorer. Just attack.'" Rivers said. "And I thought that freed him up."

Rondo scored 10 in the second and the first two baskets of overtime, including a post-up hook shot over Jeff Teague that gave Boston the lead for good.

"I felt good about all the shots I took," Rondo said. "My teammates told me to stay aggressive. Nights like tonight when I take a lot of shots, I finally found a way to get my team a win."

Game 4 is on Sunday.

Ray Allen returned for Boston after missing almost a month and scored 13 points in 38 minutes. Kevin Garnett had 20 points and 13 rebounds, and Paul Pierce had 21 points one game after scoring 36 points with 14 rebounds to help the Celtics swipe home-court advantage with a Game 2 victory in Atlanta.

Joe Johnson scored 29 points and Jeff Teague had 23 for the Hawks. McGrady had 12 points - his highest total since he had 40 for Houston in 2008 - but 10 were in the first half, before he landed awkwardly on his right ankle and went to the locker room. He did not have a field goal in the second half.

"I know I'll be sore tomorrow. I can feel it already," he said. "It affected my shot. I had no lift. It affected my cutting. I'll just go and get treatment tomorrow."

The Celtics went on an 11-1 run to open a double-digit lead with 7 minutes to play in regulation, but Atlanta rallied and tied it 80-80 on Johnson's 3-pointer with 1:23 left. Both teams failed to score on their next two possessions, leaving the Celtics with the ball out of bounds with 3.9 seconds left.

Rondo in-bounded to Pierce, who was defended by Johnson and had to take a long, fall-away jumper that bounced off the rim at the buzzer.

"There were a few possessions it seemed no one could score," Johnson said. "We definitely felt like we let one get away. We felt like this was our chance to get one."

Comments
Topics mentioned in this article
Boston Celtics JE McGrady Champions League Twenty20 2013 Joe Johnson NBA
Get the latest Cricket news, check out the India cricket schedule, Cricket live score . Like us on Facebook or follow us on Twitter for more sports updates. You can also download the NDTV Cricket app for Android or iOS.