Otago Volts enter the main draw of the Champions League T20 with three thumping wins in the qualifiers. On Friday, the New Zealand T20 champions beat Sunrisers Hyderabad by 5 wickets in Mohali. They now complete the Group A of the tournament proper. Sunrisers join Group B.

Otago Volts beat the Sunrisers Hyderabad by five wickets in the final qualifying match at the PCA Stadium, Mohali on Friday. Catch all the highlights from the game, as they happened: (Match Scorecard | Text Commentary)

Otago Volts served notice to the big boys in Group A of the Champions League Twenty20 2013, rounding off their qualifying campaign in some style with a commanding victory over Sunrisers Hyderabad in the top-of-the-table clash. (Match pics)

The outcome of this match will have little bearing on what unfurls in the next fortnight, but despite resting Ian Butler and James McMillan, their two strike bowlers, Otago still packed far too much punch for Hyderabad, outclassed in every department at PCA Stadium in Mohali on Friday (September 20) night. (Read full match report)

Otago Volts' first Group A game will be against Mumbai Indians in Ahmedabad on September 23, while, Sunrisers Hyderabad will face Trinidad and Tobago in their Group B opener on September 24th.

Man of the Match Nathan McCullum after the win - It was just nice to contribute. I got team off to decent start and it was good to get a win. Picking up both the in-form openers was a plus. It was pleasing to see the guys who got an opportunity today perform in the field. We can still continue to improve, wait and see how far we can go in this tournament. We'll be able to pick the right team seeing the conditions at the various venues during the tournament.

Brendon McCullum after the win: "We rested couple of bowlers today so we had to be tactically smarter. We began with Nathan who bowled well. I am very happy with the boys, the way they have performed. We are a bit surprised by the conditions in Mohali, they suit our style of play."

Shikhar Dhawan after the loss - "We lost the game but we tried a few things today. All our batsmen have had hits in the middle, so that's a bonus for us. The confidence is still high in the team. This was a match where we wanted to try thing s and analyse what went wrong and what went right." 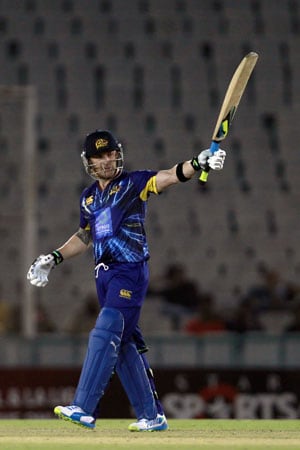 22:53 (IST) Derek de Boorder hits it uppishly over short fine leg and Otago complete a 5-wicket win with 22 balls to spare. Brendon McCullum (39-ball 67*) the star of the show for the New Zealand T20 champs.

22:50 (IST) WICKETS! Jimmy Neesham is out caught by Dhawan off Sammy, against the run of play. The all-rounder made 21 off 13 balls. New man Nathan McCullum (1) is run out a few balls later.

22:31 (IST) SIX! Left-hander Jimmy Neesham shows his talent. Goes for a lofted on-drive, with the spin of Karan Sharma and its a huge hit over deep mid-wicket.

22:21 (IST) WICKET! Dale Steyn strikes again and Hamish Rutherford (27 off 23 balls) is out. Parthiv Patel makes no mistake this time. Steyn digs it in short and Rutherford goes for a pull, gloves it to keeper. Otago 80 for 2 after 10 overs, need 64 more to win. Rutherford shared 40-ball 53 -run stand with McCullum. 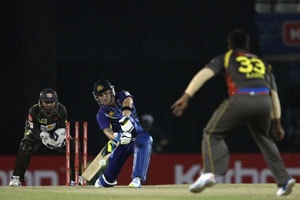 22:15 (IST) SIX! McCullum batting with gay abandon! Takes on Karan Sharma, mistimes but it still clears long on, follows it up with a four. A ball later, he comes down the track and Parthiv Patel misses a stumping! That could be costly. Otago 77 for 1 after 9 overs. Fifty partnership up between Rutherford 26* and McCullum 27*.

22:00 (IST) SIX! And guess who it is? Brendon McCullum, what a way to start your innings. Darren Sammy bowls a half-tracker around hip area and McCullum swivels and deposits it into backward square leg for maximum. 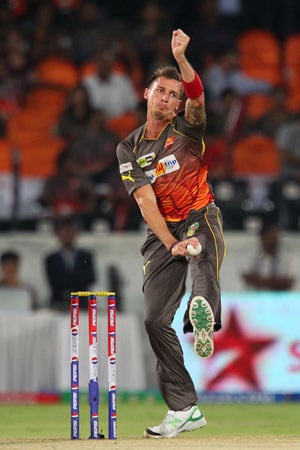 21:53 (IST) WICKET! Dale Steyn strikes and dangerous looking Neil Broom has to go. The right-hander comes down the track to Steyn, only to nick to wicket-keeper Parthiv Patel. Broom hit 16 from 15. Otago 27/1 after 3 overs.

21:48 (IST) Audacious start from Neil Broom! After pulling Steyn for 4 towards mid on, he takes the attack to Ishant Sharma in the second over. First a huge hit over mid-wicket for 4 then a nonchalant flick over backward square leg for SIX! Otago 17 for no loss after 2 overs, chasing 144 to win.

21:40 (IST) Alright then, 144 to get for Otago. Right-handed Neil Broom to take strike against Dale Steyn.

Interestingly, on a surface that offers bounce to fast bowlers, the spinners from Otago were the best bowlers. Nathan McCullum and Nick Beard took 2 wickets each.

21:25 (IST) Darren Sammy falls for 26 on the final ball of the innings and Sunrisers Hyderabad finish at 143 for 5 in 20 overs. JP Duminy, with an unbeaten 57 from 38 balls kept the innings together and shared a 38-ball 58-run stand with Sammy. Cameron White stabilized the innings somewhat with Duminy, scoring 25.

21:11 (IST) Duminy hits a four and ten Doeschate's over is now the most expensive over of the tournament so far - 21 runs from it. Two sixes by Sammy and a four by Duminy. Sunrisers 120/4 after 17 overs. 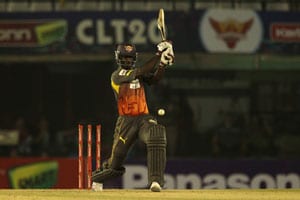 21:10 (IST) Another six! Sammy goes for it and hits another one out of the park. Poor Ryan ten Doeschate is at the receiving end.

21:09 (IST) SIX! Darren Sammy goes big and gets his first six, high and handsome over long on.

20:56 (IST) WICKET! Wagner breaks the partnership and Cameron White has to go. Trying to go over extra cover, White finds Volts skipper Brendon McCullum at the position. White made 25 from 23 balls. Sunrisers 86/4 after 14 overs. Darren Sammy is the new man in.

20:52 (IST) Duminy and White making this a good rebuilding phase for Sunrisers with a handy partnership at the moment. The two have shared 38 runs from 32 balls now. Sunrisers 83/3 after 13 overs.

20:45 (IST) SIX!Cameron White tries to up the ante and hammers Nick Beard over long on for a six, in his trademark heeve-ho style.

20:41 (IST) Left-arm spinner Nick Beard is running through his overs very quickly. Sunrisers are 58 for 3 after 10 overs. Duminy and Cameron White with a lot of rebuilding to do.

20:34 (IST) WICKET! What a catch by Michael Bracewell at the boundary. Biplab Samantray tries to go over long on, but Bracewell jumps, plucks the ball and flicks it in the air only to come back in field of play to complete the catch. Samantray made 8. Sunrisers 47/3 after 8 overs.

20:27 (IST)So the plan to open the bowling with Nathan McCullum has worked for Otago. An excellent spell of spin bowling ends for him - 2 for 23 in 4 overs. 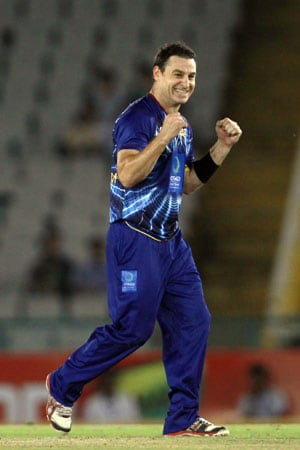 20:19 (IST) WICKET! Shikhar Dhawan gone, Nathan McCullum gets his second. Dhawan tries to go over mid on but finds an agile Ryan ten Doeschate at the position. Dhawan made 12. Sunrisers 31/2 after 5 overs.

20:16 (IST)Close shave for new batsman Biplab Samantray! Neil Wagner gets him trapped in front but umpire signals not out on both occasions. The Odisha batsman also survives a bizarre run out chance in the 4th over.

20:02 (IST) Early luck for Dhawan? The left-hander goes for a sweep and misses, a loud appeal but is not given out by umpire Paul Reiffel.

Brendon McCullum at toss: "There is some grass cover on the track. We are up against a good side, will look to perform well."

Dhawan at toss:"A total of 170-180 will be good target. We wanted to bat first, we need to know how to set targets in the main tournament."

After winning the first two games, Sunrisers and Otago square up to go into the Champions League T20 with a 100 per cent win record in the qualifiers. Hyderabad had struggled for batting muscle in the IPL, but, in more batting-friendly conditions, they have brought their A game with Shikhar Dhawan and Parthiv Patel at the forefront.

Dhawan has been a revelation as skipper, calm and composed and essentially his own man, but unafraid to seek suggestions from the likes of Darren Sammy. From Hyderabad's perspective, both victories have been achieved without Dale Steyn firing on all cylinders or JP Duminy getting a chance to exhibit his extraordinary skills. So it's all go for the youngest babe in the IPL family.

Otago's success should come as no surprise, given the wonderful depth at Brendon McCullum's disposal and their meticulous preparation coming into the competition. They spent ten days in Sri Lanka working together and getting match-fit, and have ridden on their explosive fast bowling strength and their terrific batting might.

The arrival of Ryan ten Doeschate has added more teeth all-round. Ten Doeschate showcased his value with a wonderfully versatile display against Kandurata, while Ian Butler and James McMillan have led the bowling attack with enterprise and purpose. (Read more)

Having brushed Kandurata Maroons aside by eight wickets in their opening game, Hyderabad sealed their Champions League berth with a seven-wicket rout of Faisalabad Wolves at the PCA Stadium on Wednesday (September 18) night.

"Shikhar has done a good job," he said. "At the end of the day, it is still very early on. He is going to blossom every single game that he plays. I thought his leadership today was excellent. The positive thing about Shikhar is that 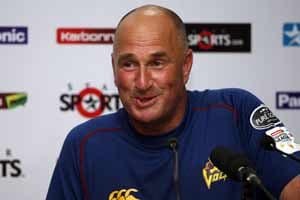 whether he is captaining or whether he is batting, he constantly wants to improve. He is always asking questions, he is always wanting to develop his game and himself. From a coaching point of view, it is a pleasure to work with people who have that open mind and are prepared to grow as people." (Read more)

Having pulled off two convincing wins in the CLT20 qualifiers, Otago Volts coach Vaughn Johnson said on Wednesday that the team had come here with a lot of belief and "flew under the radar" to surprise a couple of teams.

"We came here with a lot of belief and a side that had prepared very very well both here in India prior to the tournament and also in Sri Lanka. And quietly we just flew under the radar and I think we surprised a couple of teams," Johnson told on Tuesday. (Read more)

Comments
Topics mentioned in this article
Cricket Champions League Twenty20 2013 Jesse Ryder Brendon McCullum Sunrisers Hyderabad
Get the latest updates on ICC Women's Cricket World Cup 2022 and IPL 2022, check out the Schedule , Live Score and IPL Points Table. Like us on Facebook or follow us on Twitter for more sports updates. You can also download the NDTV Cricket app for Android or iOS.