Jesse Ryder, who hasn't played since being assaulted outside a Christchurch bar in March, is moving to Otago in a bid to play his way into the national side. 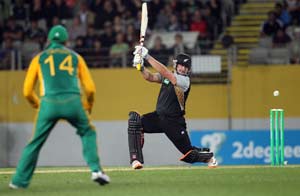 Ryder, who hasn't played since being assaulted outside a Christchurch bar in March, is moving to Otago in a bid to play his way into the national side.

He has been on a recovery programme since the assault that had him put into a medically induced coma. The attack ruled him out of the Indian Premier League and any potential return to international cricket in the New Zealand side that toured England in May.

Ryder, 28, was a part of Central Districts for two seasons before joining Wellington in 2004, four years before making his international debut. Peter Clinton, chief executive of Cricket Wellington, confirmed that Ryder had been granted his transfer request.

"We put a contract offer to Jesse, we wanted him to stay in Wellington, he's a world-class player," said Clinton. "But we respect his decision. He's decided he wants to move away and try it with Otago next season. We wish him all the best."

Ryder has not been a part of the New Zealand team since February 2012 following a self-imposed exile to deal with fitness and personal issues. Aaron Klee, Ryder's manager, said a return to international cricket was not too far away for Ryder.

"He met with Mike Hesson (the New Zealand coach) for a good talk last week. We've maintained communication with the Black Caps right through this hiatus," said Klee. "At some point, Jesse needs to get back into international cricket. We're getting close to that point."