Stephen Fleming said it could be possible that Chennai Super Kings' players became complacent against T&amp;T after securing a berth in the semi-final. 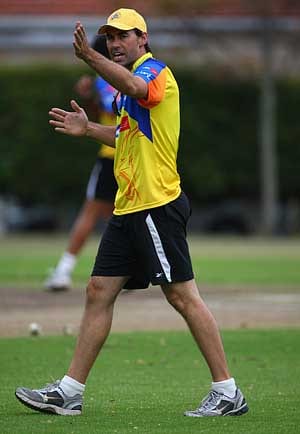 Chennai Super Kings coach Stephen Fleming has made a statement of sorts, saying that they would have loved to play Mumbai Indians in the semi-finals of the Champions League T20 after crumbling to an eight-wicket defeat against Trinidad and Tobago in their last league game here.

The already-qualified Chennai surrendered their top spot in the group to T&T after the Caribbean side overhauled the 118-run victory target with 29 balls to spare last night.

T&T needed to complete the chase within 17.4 overs and they did it in style with Man of the Match Lendl Simmons and Sunil Narine being the star performers.

The result left Chennai facing the challenge of breaking Rajasthan Royals' 12-game winning streak at home in the semis.

"Ideally, we would have liked to keep our winning ways and stay here at one place. We would have loved to face Mumbai in the semi-finals but you can't pick and choose and we are now heading to Rajasthan. They are a pretty formidable side at home and we need to be on top of our game. It's a good challenge for us," Fleming said at the post-match press conference.

"There is no illusion as we know their record at home. They played well at home and also away from home. They did well in the IPL last season and reached the semis. We all know how tough it would be for us. We had some great games against them in the past," he added.

Fleming said it could be possible that players became complacent against T&T after securing a berth in the semi-final.

"Once you qualify, there is an element of intensity which goes you try hard as a coach and as a player to keep that competitive edge," he said.

Asked about the loss to Trinidad, Fleming said Chennai kept on losing wickets at regular intervals.

"There were a couple of dismissals in the middle; we lost (Suresh) Raina and (Murali) Vijay in the middle of our innings. We kept on losing wickets and did not last full 20 overs which meant we were out of the game. We lost the plot halfway into the game. It was a sub-standard performance from us," he said.

Fleming said playing back-to-back semi-final and final would be tough on the team.

"Playing two days would have been tough on us. Although, we would have loved to stay on at one place but I would like to see the Rajasthan home crowd. It maximises the interest in the game," he said.

The only worrying factor for Chennai Super Kings is the poor form of Ravindra Jadeja, but FlemingÂ  said he's been targeted by the rival players.

"He is being targeted. Players are aggressive against him. He only comes on to bowl after six overs. I believe he is a better ODI bowler. He has been good for us," he said.

Fleming praised the way T&T used their strike bowler -mystery spinner Narine in the middle of the innings.

"They played a good game. Narine is a sensational bowler. He was just terrific and dominated with the ball. He did not allow easy runs," he said.

Chennai's move to send S Badrinath down the batting order did not work for them and Fleming revealed it was done to build pressure on Narine and unsettle him early on.

"It was for Narine. We wanted to be aggressive early on; we wanted to get ahead of the game. Narine was bowling well and applied pressure on us. We wanted to counter-attack but the move did not work out for us."

Fleming said he has no plans to tinker with the team's batting order.

"I don't have any concern with the batting order. Vijay is good at the top, striking the ballÂ  nicely. Hussey did not get runs today but he has been good for us. Raina is in majestic form. Others are also playing their part. It just we need to keep our confidence going and play well in the next game," he said.

Over the years, Chennai have remained a force to reckon with, be it in Indian Premier League or in Champions League, and Fleming said the reason behind the success is that every member of the team knows his role and responsibility.

"We have been successful over the years because every guy in the team understands his role. They know what is expected of them."

Comments
Topics mentioned in this article
Cricket Stephen Fleming Champions League Twenty20 2013 Chennai Super Kings Trinidad and Tobago Rajasthan Royals Mumbai Indians
Get the latest updates on ICC T20 Worldcup 2022 and CWG 2022 check out the Schedule, Live Score and Medals Tally. Like us on Facebook or follow us on Twitter for more sports updates. You can also download the NDTV Cricket app for Android or iOS.