Titans are placed second on the points table with two wins from three matches (eight points) while T&amp;T are stuck in mid-table traffic after suffering an unlikely defeat at the hands of Thisara Perera and Sunrisers Hyderabad on September 24 in Mohali. 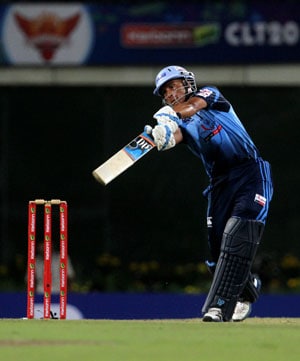 With the race for the lone available semi-final spot from Group B intensifying, Trinidad and Tobago will face a fired up opponent in the Titans in their Champions League Twenty20 match here on Monday.

Titans are placed second on the points table with two wins from three matches (eight points) while T&T are stuck in mid-table traffic after suffering an unlikely defeat at the hands of Thisara Perera and Sunrisers Hyderabad on September 24 in Mohali.

Another win for Titans will ensure their safe passage to the semi-finals with a game to play against 2013 IPL finalists Chennai Super Kings in Delhi on October 2. A T&T victory, on the other hand, will open up the group.

In their previous game against Sunrisers, Titans skipper Henry Davids and Jacques Rudolph put on a century stand to lead their side to a crushing eight-wicket win in Ranchi.

The South African side romped over Sunrisers' total of 145 in just 16.3 overs with two wickets down to give a major boost to their run rate.

T&T will have to recover quickly from their defeat against Sunrisers if they are to fancy their chances of qualifying for the semifinals, provided they win their next two games by a good margin.

They can take heart from their comfortable 25-run victory against Brisbane Heat in their first game.

For T&T, their bowling is their strength, led by pacer Ravi Rampaul and mystery spinner Sunil Narine, who have shared 10 wickets between them.

Rampaul was terrific with his four-wicket haul in the game against Brisbane Heat while Narine was at his deceptive best with his four-for against Sunrisers albeit for a losing cause.

The T&T camp would be hoping for another disciplined show from their bowlers at the Sardar Patel Stadium, Motera.

Their batting mainly revolved around Darren Bravo's 44-ball 66 against Sunrisers in Mohali but rest of the batsmen failed to support him. The team would be hoping significant contributions from skipper Denesh Ramdin, Lendl Simmons, Darren Bravo and Sherwin Ganga in the upcoming match.

Titans, handed a defeat in their opening match, completely transformed themselves with clinical wins against Brisbane Heat and Sunrisers.

Titans came up with brilliant batting display against the Sunrisers and took their bowlers to task with a scintillating batting display. Davids and Rudolph transformed the run chase into a cakewalk and the team would be again heavily banking on them to give the team a rollicking start.

The experienced campaigners like Morne Morkel and Roelof van der Merwe, even Row Richards and Marchant de Lange have proved their potential in the bowling department.

Come tomorrow, both the Titans' batsmen and bowlers will be hoping to put up a great team work against an equally formidable batting and bowling line-up.

Comments
Topics mentioned in this article
Cricket Trinidad and Tobago Davy Jacobs Champions League Twenty20 2012 Suresh Raina MS Dhoni Champions League Twenty20 2013
Get the latest updates on ICC T20 Worldcup 2022 and CWG 2022 check out the Schedule, Live Score and Medals Tally. Like us on Facebook or follow us on Twitter for more sports updates. You can also download the NDTV Cricket app for Android or iOS.