Shikhar Dhawan's magnificent 71 was easily the innings of the night as it put to shade half-centuries from three other left-hand batsmen in the match. 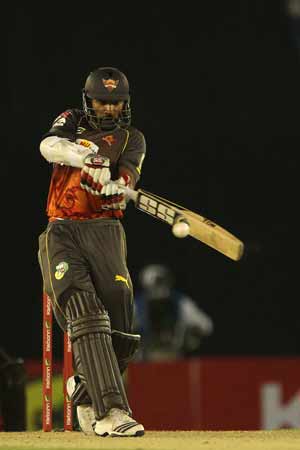 On a day of captains and a night of left-hand batsmen, Shikhar Dhawan made his captaincy debut with Sunrisers Hyderabad an occasion to remember at the venue where he announced his arrival in international cricket.

Some six months back, Dhawan made an awe-inspiring 187 against Australia in Mohali, an innings of such authority and class that it was hard to imagine that it was his Test debut. On Tuesday (September 17), also at PCA Stadium, he made well under half those number of runs but there was no mistaking the class or the authority. (Match in pics)

Dhawan's magnificent 71 was easily the innings of the night as it put to shade half-centuries from three other left-hand batsmen - Parthiv Patel, Kumar Sangakkara and Lahiru Thirimanne, the Kandurata Maroons skipper - in the second qualifying match of the Champions League Twenty20 2013.

Set a stiff target of 169 to chase, Hyderabad fairly coasted to victory, by the comfortable margin of eight wickets, riding on the back of Dhawan's pyrotechnics and his entertaining stand of 121 in 83 balls for the first wicket with Patel that set up the final tally of 174 for 2.

Kandurata had reason to believe they were in with a shout when Thirimanne and Sangakkara associated themselves in an 89-run partnership to propel the total to 168 for 3, but Dhawan and Patel had other ideas, treating a very sparse crowd to spectacular strokeplay and making Kandurata's total appear no more than par for the course. (Also watch: Shikhar Dhawan talks to NDTV about his off-field innings)

Patel was the early aggressor, taking the attack to Lahiru Jayaratne and Nuwan Kulasekara, but once Dhawan came to the party, Patel wisely stepped back and soaked in the entertainment from the best seat in the ground. Boundaries flowed with amazing regularity from Dhawan's willow, each stroke an epitome of timing rather than brute force. Kandurata had few answers to the frenetic pace of scoring, and even though both openers fell within 15 runs of each other, Thisara Perera got his own back after an expensive stint with the ball to bring up victory in some style.

Dhawan's decision to put Kandurata in was in part influenced by the possibility of dew, which eventually was a non-factor, but it was as if Dale Steyn, his premier strike bowler, was having a tough time gripping the ball. Steyn got gentle swing in his first over, but kept drifting down the leg to Upul Tharanga and went for 14, all on the on side.

Tharanga lay into Steyn with four boundaries off the pacer's first eight deliveries, but Ishant Sharma was brilliant at the other end, generating good pace and procuring appreciable movement. His first three overs went for just six as he made up for Steyn's parsimony, and frustrated Tharanga enough for the batsman to charge him and inside edge a hoick to Patel behind the stumps.

When Shehan Jayasuriya's laboured knock was terminated by Darren Sammy, Hyderabad might have thought they were on to a good thing, but they couldn't have been more wrong. Sangakkara and Thirimanne fairly toyed with them, the latter embracing the role of the enforcer as the senior pro was happy to bide his time.

The profusion of left-hand batsmen in the Kandurata line-up, strangely, forced Dhawan to keep Amit Mishra and Karan Sharma, his two legspinners, out of the attack for long periods, even as the rest of the bowlers failed to make an impression. Mishra, high on confidence after his recent exploits with the national team in Zimbabwe, bowled just one over, the 15th, while Karan didn't get even that luxury even as JP Duminy sent down three overs of offspin and Perera completed a very expensive four-over spell that yielded 43.

Neither Thirimanne nor Sangakkara was complaining. With the bowling reasonably friendly - Steyn included - both were able to play their shots with impunity, effortlessly changing gear after having got their eye in. The first ten overs yielded 66, but the second half was more productive as Kandurata amassed 102. Thirimanne called the shots in the 89-run third-wicket stand with Sangakkara, but after Ishant had sent the captain packing, Sangakkara came into his own with a little help from Dilhara Lokuhettige, the only right-hand batsman seen in action during the match.

The fourth-wicket pair put on 46 in just 25 deliveries. It was an explosive finish to a pleasing batting stint, but it was not enough. Not even close.