Rajasthan Royals have been under the pump after the spot-fixing allegations on three of their players in the Indian Premier League. However, with a leader like Dravid at the helm, the team has managed to rise from the ashes. 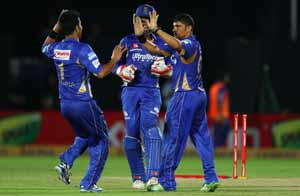 With Rajasthan Royals all set to play Mumbai Indians in the Champions League T20 final, it could be the perfect fairytale ending for Rahul Dravid's boys.

While the 40-year-old former Indian skipper has been the perfect leader for his team in the tournament despite not having flourished with the bat, he has also been ably supported by another player in his 40s - Pravin Tambe.

The Maharashtra leg-spinner, who has not even played domestic cricket, has been instrumental in Rajasthan's success with 10 wickets in 4 matches at a staggering average of 5.90 and an even astonishing economy rate of 3.93.

Even India cricket legend Sunil Gavaskar, has been unequivocal in his praise for both the players. in his column in the TOI, Gavaskar credits Tambe to be the 'man-of-the-moment' for Royals. He especially mentions the way Tambe got Suresh Raina out in the Rajasthan vs Chennai Super Kings' semifinal.

"The man of the moment is Pravin Tambe. The 40-plus 'youngster' has shown that even in this version of the game there is a place for leg-spin bowling."

"He was not trying to deceive the batsmen in the air but was bowling wicket-to-wicket, knowing that the pitch was not helping him to get too much turn. He was reading the batsman's intentions quite well and that is how he got rid of the dangerous Suresh Raina," says Gavaskar.

Rajasthan Royals have been under the pump after the spot-fixing allegations on three of their players in the Indian Premier League. Having a leader like Dravid at the helm though, the team has managed to rise from the ashes. If they win at the Feroz Shah Kotla in Delhi today, it would be apt for the 'Wall' since he is not expected to continue playing competitive cricket next season.

"Their entry into the final is heartwarming after all they had to suffer and bear during the IPL. If they win the Champions League, it will be a fairy tale like finish, not just for the team, but especially for skipper Rahul Dravid, who will not play serious cricket after this."

"It is not a team of superstars but most of them are performing better than some of the superstars, and that is why they are in the happy position of being in the final," says Gavaskar, lauding Dravid and his team's efforts in times of adversities."

Comments
Topics mentioned in this article
Cricket Rajasthan Royals Champions League Twenty20 2013 Pravin Tambe Sunil Manohar Gavaskar Rahul Dravid
Get the latest updates on ICC T20 Worldcup 2022 and CWG 2022 check out the Schedule, Live Score and Medals Tally. Like us on Facebook or follow us on Twitter for more sports updates. You can also download the NDTV Cricket app for Android or iOS.