Ajinkya Rahane and Pravin Tambe took the game away from Chennai Super Kings with gritty display as Rajasthan Royals maintained their stupendous record at home. 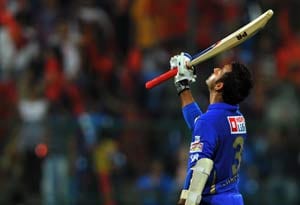 # Rajasthan Royals have registered their 13th successive win at Jaipur in Twenty20. Their tally includes eight in IPL and five in CLT20.

# Rahane's aforesaid innings is the highest by a Rajasthan Royals' batsman in the CLT20, surpassing his 62 not out off 53 balls vs Scorchers at Jaipur on September 29, 2013.

# Rahane is the first Rajasthan batsman to register three fifties in the CLT20. With 223 runs at an average of 55.75 in five matches, he is the top run-scorer for Rajasthan in the CLT20.

# Tambe is the first and only bowler to bowl 15 overs in the present competition without conceding a six.

# Tambe's economy rate of 3.93 is the best amongst the bowlers claiming five wickets or more in the present competition.

# Ashwin (46 off 28 balls) has posted a career-best in Twenty20. His innings is the highest by number nine batsman, eclipsing Lasith Malinga's unbeaten 37 off 18 balls for Mumbai vs Chennai at Chepauk on September 24, 2011.

# Ashwin and Morris have shared a stand of 73 - the highest eighth-wicket partnership in the CLT20, outstripping the 53 (unbroken) between Harbhajan Singh and Lasith Malinga for Mumbai Indians vs Chennai Super Kings at Chennai on September 24, 2011.

# Not even a single batsman has managed a fifty vs Rajasthan Royals in the CLT20 - the highest being Ashwin's 46 (as above).

Comments
Topics mentioned in this article
Cricket Shane Watson Pravin Tambe Suresh Raina Ajinkya Rahane Champions League Twenty20 2013 Ravichandran Ashwin Rajasthan Royals
Get the latest updates on ICC T20 Worldcup 2022 and CWG 2022 check out the Schedule, Live Score and Medals Tally. Like us on Facebook or follow us on Twitter for more sports updates. You can also download the NDTV Cricket app for Android or iOS.