Sunil Narine, with eleven wickets at 7.81 runs apiece in five matches, is the top wicket-taker in the CLT20 2013. 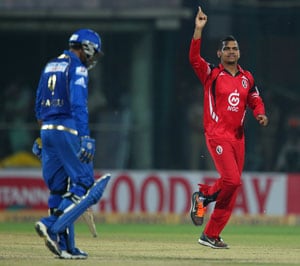 Statistical highlights from the second semi-final between Mumbai Indians and Trinidad & Tobago:

# Mumbai Indians became the first team to qualify in a CLT20 final for the second time - the first instance being in 2011, defeating RCB by 31 runs at Chennai on October 9, 2011 in the final.

# For the second time, two IPL teams would be contesting the CLT20 final.

# Darren Bravo (14 off 16 balls) has extended his record for the highest run-aggregate for T&T in the CLT20 - his tally being 419 at an average of 34.91 in sixteen matches, including three fifties.

# Both Bravo and Lewis have recorded nine sixes each - the most for Trinidad & Tobago in the CLT20 2013.

# Lendl Simmons has recorded his eighth duck in Twenty20. He is the first Trinidad player to record three ducks in the CLT20.

# Simmons became the second batsman to register three ducks in a CLT20 competition - the first being Victoria's Rob Quiney in 2009.

# Smith has received his 14th Man of the Match award in Twenty20.

# Ambati Rayudu has recorded his first duck for Mumbai Indians in the CLT20.

Comments
Topics mentioned in this article
Cricket Mumbai Indians Trinidad and Tobago Sunil Narine Davy Jacobs Champions League Twenty20 2013 Suresh Raina MS Dhoni
Get the latest updates on ICC T20 Worldcup 2022 and CWG 2022 check out the Schedule, Live Score and Medals Tally. Like us on Facebook or follow us on Twitter for more sports updates. You can also download the NDTV Cricket app for Android or iOS.