Sachin becomes the 16th player ever to reach this landmark in the sport and is the first player from Asia to do so. 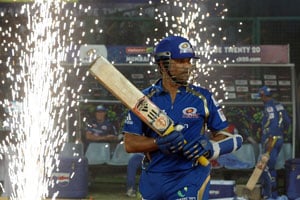 In Mumbai Indians' semi-final against Trinidad and Tobago on Saturday, Sachin Tendulkar reached another landmark by completing an astounding 50,000 runs in competitive cricket across all formats.

Needing 26 runs on the day to reach the mark, Tendulkar tucked the ball towards midwicket for a single off left-arm spinner Yannick Ottley to reach another milestone in a glorious career spanning close to two-and-a-half decades. (Match pics)

He scored 35 off 31 balls before being dismissed by Lendl Simmons. (Didn't know about the record: Sachin)

Having scored 2747 in the 94 earlier T20 matches, the Master Blaster scored the necessary 26 runs with ease.

Tendulkar has had an ordinary 2013 CLT20 tournament till the semifinals and could score only 20 runs in four matches with a highest score of only 15. (Mumbai beat Trinidad, enter final)

Sachin is also standing on the cusp of another rare feat of becoming the first player in the history of the game to play 200 Test matches, which in all likelihood will be completed in the upcoming two-Test series against the West Indies.

Comments
Topics mentioned in this article
Cricket Graham Alan Gooch Sachin Ramesh Tendulkar Champions League Twenty20 2013 Mumbai Indians
Get the latest updates on ICC T20 Worldcup 2022 and CWG 2022 check out the Schedule, Live Score and Medals Tally. Like us on Facebook or follow us on Twitter for more sports updates. You can also download the NDTV Cricket app for Android or iOS.