Rajasthan became the first team from Group A to ensure qualification, with 12 points from three matches. They join Chennai Super Kings, the only other team guaranteed a semifinal spot. 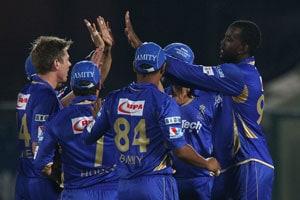 Rajasthan Royals strolled into the semifinals of the Champions League Twenty20 2013 with an emphatic nine-wicket win over Perth Scorchers in the second match at the Sawai Mansingh Stadium in Sunday (September 29). Bowling first, Rajasthan shot Perth out for 120, and then reached the target in just 16.3 overs.

Rajasthan became the first team from Group A to ensure qualification, with 12 points from three matches. They join Chennai Super Kings, the only other team guaranteed a semifinal spot. (Match highlights)

Rajasthan's victory was set up by the bowlers and completed by the batsmen. Kevon Cooper did the star turn with the ball, taking 4 for 18 from four overs, while Pravin Tambe and James Faulkner had a brace of wickets each. (Pics)

Ajinkya Rahane (62 not out off 53) and Sanju Samson then shrugged off the dismissal of Rahul Dravid for a duck in the first over to take Rajathan home without much ado. Samson was initially more aggressive but as the 120-run second-wicket stand progressed, Rahane got into his groove and picked runs off at will.

Samson and Rahane were both strong off their pads, and punished the bowlers whenever given room. As the stand developped and they grew more comfortable, they occasionally punished even the good balls. Rahane played a Tendulkar-esque upper cut to Jason Behrendorff that bounced just inside the ropes, and reached his fifty with a cover-driven six off Michael Beer.

Samson got to a deserved half-century with a straight-driven four off Joe Mennie, remaining unbeaten on 50 (42 balls), while Behrendorff (1 for 28) took the only wicket to fall.

Perth's batsmen had come out with a plan to attack at the start, and didn't let up even when a couple of wickets fell. Liam Davis took the bowlers on, and though he fell to Faulkner after a 12-ball 18, Perth's run-rate was healthy. Ashton Agar, the other opener, followed Davis soon after, leaving Perth 29 for 2 in 4.1 overs.

Adam Voges and Simon Katich then got together in Perth's best phase of the match. While the duo were together, Perth looked good for a competitive total. Voges was timing the ball well, with Katich, the captain, playing the supporting role.

As he had in Rajasthan's win against Highveld Lions, Tambe came on and made the difference, foxing Katich with a googly that drew him out for Samson to complete the stumping. Cooper then got into the act, to break the back of Perth's middle order.

Perth were relatively safe at 62 for 2 in the ninth over, but then Katich fell, and the rest followed like ninepins as Perth slid to 97 for 9 in 17.2 overs. Cooper grabbed four of the wickets to fall, including the vital one of Voges, who failed to clear Faulkner at long-on. He departed after 27 off 21 balls, the highest score of the innings.

The last-wicket pair of Behrendorff and Beer stretched the score with the second-highest partnership of the innings (23), and Perth were only bowled out off the final ball when Beer was run out trying to steal a bye.

While plucky, the addition of those runs was never going to be of more than cosmetic value, against a team who have now won 11 of 11 matches - across IPL VI and the CLT20 - in Jaipur in 2013.