Volts' semifinal chances now depend on the outcome of the final Group A match between Mumbai Indians and Perth Scorchers at Delhi today. 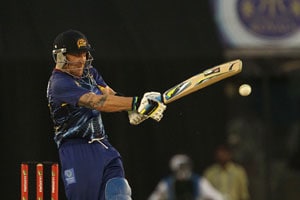 Rajasthan restricted the Kiwis to a modest 139 for seven following a fiery spell of fast bowling by Shukla (3/23) and then rode on Hodge's unbeaten 23-ball 52 to overhaul the target with five balls to spare on Tuesday.

"He (Shukla) generated good pace and swung the ball beautifully. The ball with which he bowled Hamish Rutherford was a cracking delivery," McCullum said.

"I believe we did a really good job to get to 140, and especially with the ball, we showed some good fighting abilities. But the way Hodge played at the end was brilliant. It didn't take me by surprise.

" I think Rajasthan scored 50 odd runs in four overs but that Hodge has done many times for Royals and has pulled them out of the crunch moments. He is a class player," he said.

McCullum himself was disappointed with his performance with the bat in the tournament.

"I had a pretty good qualifying tournament at Mohali and had scored some runs but here I could play only 8 balls in three matches and one was washed away. That is really disappointing," he said.

Volts' semifinal chances now depend on the outcome of the final Group A match between Mumbai Indians and Perth Scorchers at Delhi today.

The Kiwi outfit will be hoping for Mumbai's defeat to qualify for the semifinals.

"We had the game for taking but we didn't grab the opportunity. So out fate now depends on the outcome of the Mumbai Indians and Perth Scorchers match. We will have to keep a close watch on it," McCullum said.

Comments
Topics mentioned in this article
Cricket Rajasthan Royals Rahul Shukla Brendon McCullum Champions League Twenty20 2013 Jesse Ryder Brad Hodge
Get the latest updates on ICC T20 Worldcup 2022 and CWG 2022 check out the Schedule, Live Score and Medals Tally. Like us on Facebook or follow us on Twitter for more sports updates. You can also download the NDTV Cricket app for Android or iOS.