The IPL champions Mumbai Indians have the experience of playing and winning two matches at Kotla while Royals have played all their matches at home. 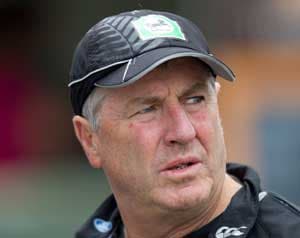 Mumbai Indians coach John Wright says their familiarity with the conditions at the Freozshah Kotla gives them edge in the Champion League Twenty20 final against Rajasthan Royals, who will play out of their comfort zone.

The IPL champions Mumbai Indians have the experience of playing and winning two matches at Kotla while Royals have played all their matches at home.

"We are pleased to play two matches here. It will surely help us. The Royals will take time in order to adjust to the Delhi track," Wright said after his side stormed into the final of the tournament on Saturday.

"We are all thrilled about Sachin's amazing milestone. I hope he adds another few landmarks in his career. It is always pleased to see a player achieving some as big as this," Wright said.

Today's final will be the last time the two Indian batting legends, Tendulkar and Rahul Dravid of Royals, will be competing in the franchise-based league but Wright said they are not thinking about it too much and want to win the final.

"We are focusing on the result of tomorrow's match which is more important for us," he said.

T&T, on the other hand, rued lack of support to spinner Sunil Narine.

"We were hoping few more of them (bowlers) would step up. But unfortunately no one really supported Sunil. We also missed Rayad Emrit who could not bowl due to an injury," team wicket-keeper Dinesh Ramdin said.

"We were 15 runs short on this wicket. In our team meetings, we had decided one of the top three batsmen would play till the 17th over which did not happen in this match and it came back to haunt us," he said.

On his team's experience of playing at the CLT20, Ramdin said, "It has been great learning experience for young players such as Evin Lewis, Nicolas Pooran. As a team we were passionate to play in this competition and gave our 100 per cent which was enjoyable to see."

Comments
Topics mentioned in this article
Cricket Davy Jacobs Suresh Raina MS Dhoni Champions League Twenty20 2013 John Geoffrey Wright Mumbai Indians
Get the latest updates on India vs England Series, India vs England , live score and IPL 2021 Auction . Like us on Facebook or follow us on Twitter for more sports updates. You can also download the NDTV Cricket app for Android or iOS.