CLT20: I was under pressure in Super Over, says Otago Volts' James Neesham

The Otago Volts coach Vaughn Johnson praised the efforts put in by his team. Highveld Lions skipper Alviro Petersen, however, blamed his bowlers for the defeat. 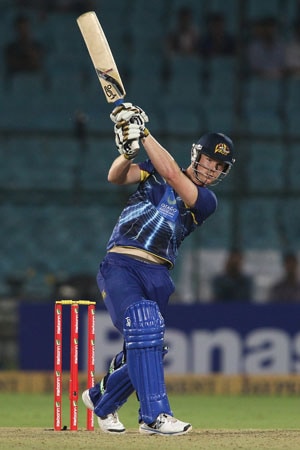 His all-round performance gave Otago a thrilling win over Lions but New Zealand's James Neesham admitted he was under pressure after being hit for boundaries in the Super Over in their Champions League Twenty20 match on Sunday.

Neesham said he was confident that his team will come on top of the Lions after they managed to tie the match but the four and a six in the first two balls in the one-over eliminator put him under pressure.

"We knew before going for the super over that we would come on top," said Neesham, who hit 52 off 25 balls and bowled superbly in Super Over to help his team post a thrilling victory over Highveld Lions.

"But after being hit for a boundary and six in the decisive over created some pressure and I thought of trying some things like yorkers and it did work," said the youngster.

"I am happy it ended in our favor," said Nessham who also bagged the Man of the match award.

The Otago Volts coach Vaughn Johnson praised the efforts put in by his team.

"It was really a nice effort and there were lots of ups and downs. I feel James (Neeshan) has bright future and would be playing for country for many years to come," said the coach.

"We had come here after a lot of preparation and qualified after winning all three matches at Mohali. We have already two victories and have a real chance of making it to semifinal.

"We would love playing our semifinal at Jaipur as the wicket here suits us. Overall it has been huge experience for the team," said Johnson.

Highveld Lions skipper Alviro Petersen, however, blamed his bowlers for the defeat.

"It is our worst bowling performance for years. It was really disappointing after being in good position we had to finish like this," he said.

Comments
Topics mentioned in this article
Cricket Faf du Plessis Champions League Twenty20 2012 Brendon McCullum Chris Morris Jesse Ryder Champions League Twenty20 2013 James Neesham
Get the latest updates on ICC T20 Worldcup 2022 and CWG 2022 check out the Schedule, Live Score and Medals Tally. Like us on Facebook or follow us on Twitter for more sports updates. You can also download the NDTV Cricket app for Android or iOS.