CLT20: I want my spinners to do an 'Eric Hollies' on Sachin Tendulkar, says Justin Langer 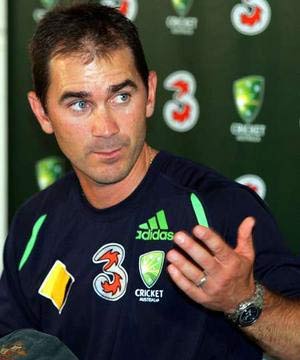 It's no secret that Australian cricketers over the years have respected Sachin Tendulkar more than anyone of his peers but when Perth Scorchers take on Mumbai Indians in a Champions League T20 match on Wednesday, coach Justin Langer would like one of his bowlers do an "Eric Hollies" to the Indian legend.

"I hope we have a Hollies in our team tomorrow when we bowl to Sachin. Hollies wasn't that the name?" Perth Scorchers coach Langer smiled and asked the scribes to confirm the name of the English leggie.

"Well, I love watching Sachin bat and wish he never gets out. But tomorrow, I won't like him to score too many runs. Even at this age of 42 (40), he batted in the nets for two hours the other day. That was incredible," said Langer, who has played many times against Tendulkar, in Test matches in India and Down Under.

For Langer, "the toughest test for any Aussie cricketer is playing India in India."

"I would like my boys to take up the challenge of playing against superstars. This is an inexperienced side and they will learn a lot from this trip. Look at Otago Volts. They have come here three times and now it's showing results."

"They have to face a trouble-maker like Harbhajan. Well, please don't make a controversy when I term Harbhajan as a trouble-maker. I mean he is a guy who would always like to have a competition or two with us over the years."

Not having a full strength side has been Scorchers' undoing during this season.

"We didn't have Marsh brothers -- Shaun and Mitch -- due to injury. We didn't have Pat Cummins while Nathan Coultier-Nile and Mitchell Johnson decided to play for Mumbai Indians. So we had a side that was very thin on experience. But that's no excuse. The first match was washed out due to heavy rains and we played poorly in the next two matches. If we hadn't dropped a couple of crucial catches, the matches could have swung in our favour."

Langer admitted that they were in for a bit of a surprise after having a look at the Sawai Man Singh Stadium strip which offered a lot of movement and bounce.

"We packed our sides with four spinners and then found out that Jaipur track had a lot of pace and bounce. We didn't have Cummins and that became a factor,"

Comments
Topics mentioned in this article
Cricket Justin Langer Sachin Ramesh Tendulkar Suresh Raina MS Dhoni Champions League Twenty20 2013 Davy Jacobs Mumbai Indians
Get the latest updates on ICC T20 Worldcup 2022 and CWG 2022 check out the Schedule, Live Score and Medals Tally. Like us on Facebook or follow us on Twitter for more sports updates. You can also download the NDTV Cricket app for Android or iOS.