CLT20: Harbhajan Singh brought us back into the game, says Rohit Sharma

Rajasthan went from 117 for 1 to 169 all out in the space of seven overs, and the man to make the big difference was Harbhajan Singh, who got the wickets of Shane Watson, Rahane, Stuart Binny and Kevon Cooper. 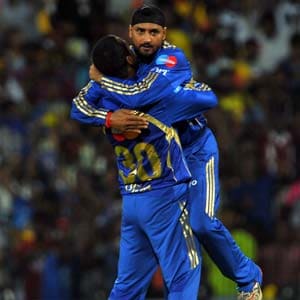 It was only after Ricky Ponting stood himself down from the captaincy of Mumbai Indians during IPL VI that Rohit Sharma became the team's captain. It was clearly an inspired call to promote him, and Rohit has now led Mumbai to glory in both the IPL and, on Sunday (October 6), the Champions League Twenty20. Rohit has himself played key knocks to help his team achieve its success.

"It is very important for the captain to lead from the front," he said, after lifting the CLT20 trophy in New Delhi. "For me, that means getting my team into a good position whenever I bat. I am glad that my teammates supported me really well through the tough times. So it wasn't a problem. If you look at MS Dhoni, he has done it so many times, so it's important to take charge and lead from the front."

His job, he said, was not a very tough one either considering the people working in the background. "John Wright has worked with the Indian team for so long, he knows the Indian mentality and how we work. It's easy to work with him, as well as with Anil Kumble, Robin Singh and Jonty Rhodes... they were the ones working behind the scenes on strategies. It's my decision on the field, but they helped a lot," said Rohit.

Coming to the final game against Rajasthan Royals, though Mumbai scored 202 for 6 and won by 33 runs in the end, things were going neck and neck till the 17th over of the Rajasthan reply when Ajinkya Rahane fell soon after Sanju Samson had been sent back. "You are never out of the game on a pitch like this," said Rohit. "We scored 60 in the first ten overs and then 142 in the next ten.

"In a big game, every over is important and you will be put under pressure at some stage. We were prepared for them to play their strokes and get runs. We knew it was a matter of getting a breakthrough. As soon as Samson was out, we were in the game. We knew 200 is tough to chase. We put pressure and it worked and we kept getting wickets."

Rajasthan went from 117 for 1 to 169 all out in the space of seven overs, and the man to make the big difference was Harbhajan Singh, who got the wickets of Shane Watson, Rahane, Stuart Binny and Kevon Cooper. "He's a match winner; he brought us back in the game," said Rohit. "I was not worried about his recent form. I knew he would deliver in a big game."

Comments
Topics mentioned in this article
Cricket Mumbai Indians Rohit Sharma RG Sharma Suresh Raina MS Dhoni Harbhajan Singh Champions League Twenty20 2013 Davy Jacobs
Get the latest updates on ICC T20 Worldcup 2022 and CWG 2022 check out the Schedule, Live Score and Medals Tally. Like us on Facebook or follow us on Twitter for more sports updates. You can also download the NDTV Cricket app for Android or iOS.