The match between Sunrisers Hyderabad and Brisbane Heat has been called off due to rain, ending the IPL team's hopes of making it to the last four. 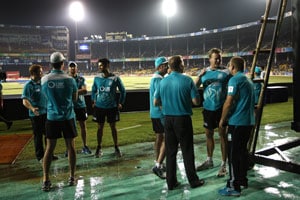 21:14 (IST): Rain ends Sunrisers Hyderabad's hopes of making it to the semifinals of the Champions League Twenty20 as the match against Brisbane Heat in Ahmedabad has been called off. After sharing two points each, Sunrisers finished with six points while Brisbane ended with two. (Scorecard | Commentary)

19:52 (IST):It's still raining in Ahmedabad. Trinidad & Tobago won the first match by 6 runs via Duckworth-Lewis method against Titans. The win puts Trinidad joint second with Titans on the points table.

19:29 (IST): Toss of the second match is delayed as it's pelting down in Ahmedabad at the moment and the first match is stopped. With three overs remaining, Titans need 38 off 18 balls to win the match. However, the South African side is six runs behind par score in Duckworth-Lewis method, meaning if rain plays spoilsport here then Trinidad will have the best chance of making it to the last four. PREVIEW
Sunrisers Hyderabad will clash against Brisbane Heat in a make-or-break Champions League Twenty20 match here on Monday, the outcome of which will decide if the Shikhar Dhawan-led Indian outfit can still be in race for a semifinal spot.

Sunrisers would have to win this match by a huge margin if they are to stand any chance of qualifying for the last-four stage, provided Trinidad and Tobago win against Titans and then lose to Chennai Super Kings in their last group match.

Brisbane Heat, on the other hand, are already out of contention with not a single win from three matches. No combination of results will help Brisbane Heats make the semis, who would look to spoil Sunrisers' party and end their miserable campaign with a consolation win.

With one win and two defeats, Sunrisers are also staring down the barrel with only four points from three matches and a net run-rate of -0.622.

Comments
Topics mentioned in this article
Champions League Twenty20 2013 James Hopes Shikhar Dhawan Cricket Suresh Raina MS Dhoni Davy Jacobs
Get the latest updates on IPL 2021, check out the IPL 2021 Schedule and Indian Premier League Live Score . Like us on Facebook or follow us on Twitter for more sports updates. You can also download the NDTV Cricket app for Android or iOS.