Shikhar Dhawan, despite missing out on the early part of IPL 2013, was the leading run-getter for Sunrisers, scoring 311 runs in 10 matches at 38.87. The next best was Parthiv Patel, getting 294 runs in 13 matches. 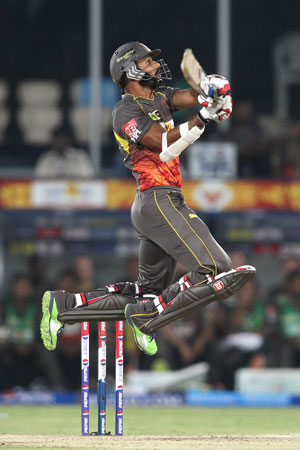 Shikhar Dhawan will be the skipper of the Sunrisers Hyderabad for the upcoming Champions League Twenty20 tournament. With Kumar Sangakkara playing for 'home' side Kandurata Maroons, Sunrisers have chosen Dhawan to lead a side that boasts of players like - Darren Sammy (former West Indies skipper), JP Duminy, Dale Steyn - et al.

The dashing left-hander who rose to limelight after the memorable and blistering 187 on Test debut against Australia in Mohali, missed the first seven matches of the Indian Premier League 2013 due to a hand injury sustained in the Mohali Test.

Sangakkara, who was the appointed captain of the Sunrisers for the IPL, handed over the role to Australian Cameron White after a major dip in his form early on in the tournament. Although White is playing the CLT20, Dhawan has been the team's preferred choice to lead the side.